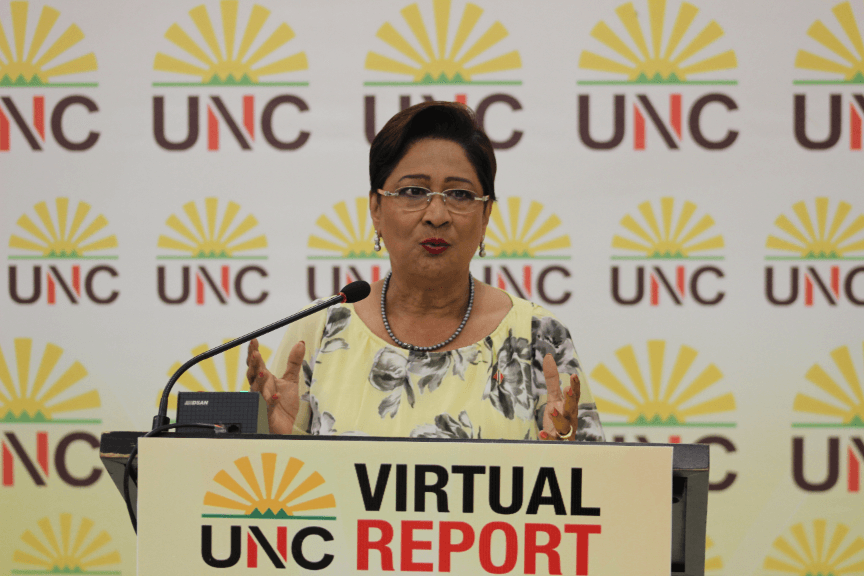 Opposition leader Kamla Persad-Bissessar is forecasting a national budget of “doom and gloom”.

Persad-Bissessar made the prediction while speaking on a virtual political platform on Monday night as she gave her thoughts on the upcoming 2021 budget.

She knocked Government’s “Spotlight on the Budget”, calling it a spotlight on “incompetence, mismanagement, and the blame game”.

She said while Finance Minister Colm Imbert hinted at some of the measures to raise revenue and revealed expenditure estimates ahead of budget, there was no mention of specific actions to assist citizens.

I didn’t hear one measure that they would enforce or bring into place to make you feel better.”

She called on Minister Imbert to ensure that the budget addresses the concerns of the people including jobs, food prices, and no implementation of the property tax.

The Opposition leader said she won’t be surprised by anything in the budget, adding that Government has made promises over the years that it can’t keep.

“You remember the six game changers? And every one of them – game over. The Sandals scandal, the Dragon Deal… all these promises that were made for development of the economy, to grow jobs in the economy, none materialised.”

Further, she said with just a week to go, the Opposition has not been informed on how the reading would take place, especially as it concerns how many members would be allowed into the House of Representatives and Senate chambers.

“So, what will it be? A COVID budget, a virtual budget? We are yet to find that out.”

Persad-Bissessar, however, assured that the Opposition bench has been busy with preparations, having engaged in consultation with stakeholders.

The 2021 Budget will be read in Parliament on October 5. The Office of the Parliament has disclosed the details on how the sitting will be conducted via its social media.

Prime Minister Dr Keith Rowley has already stated that difficult decisions would be made, but priorities, including support measures already in place will be maintained.

Imbert must 'do better' on Salary Relief Grants, Kamla says