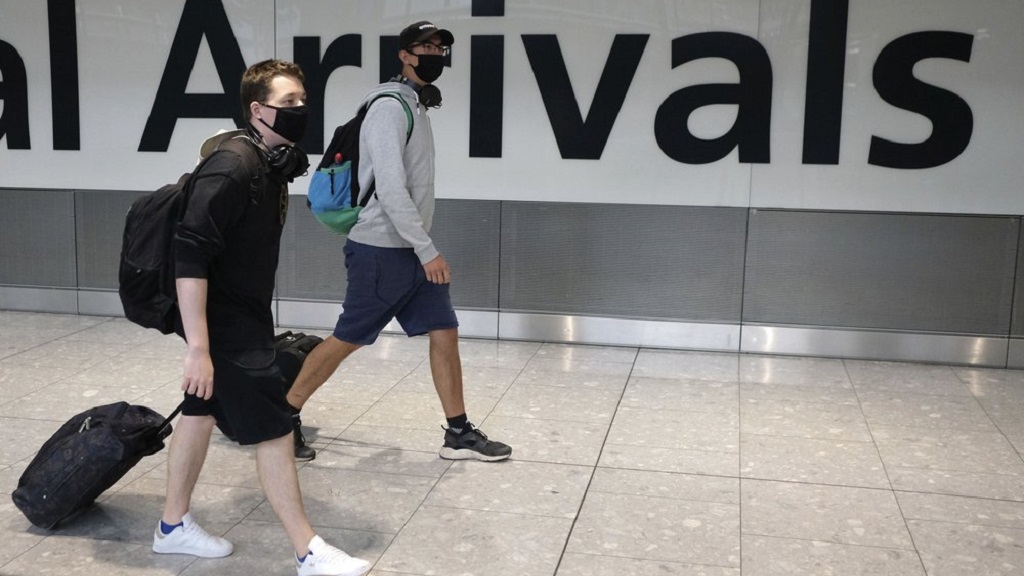 Britain is raising the self-isolation period for people who test positive for the coronavirus or have symptoms to 10 days from seven days.

The UK's chief medical officers say there's evidence people may still be able to spread the virus for more than a week after developing symptoms.

They say "people with COVID-19 who are mildly ill and are recovering have a low but real possibility of infectiousness between seven and nine days after illness onset."

Britain's seven-day quarantine was among the shortest in Europe. The World Health Organization recommends that people who have symptoms or test positive should isolate for at least 10 days.

The British government says it is concerned about rising infection rates in several neighbouring countries. Last week the UK re-imposed a mandatory 14-day quarantine on people arriving from Spain, and officials say other countries may be added to that list.

Health Secretary Matt Hancock says "you can see a second wave starting to roll across Europe and we've got to do everything we can to prevent it from reaching these shores and to tackle it."

— US is expected to report a record-breaking economic plunge

JOHANNESBURG — Africa's top health official says "this is no time for us to panic and fear" as the continent approaches the milestone of 1 million confirmed coronavirus cases.

The director of the Africa Centers for Disease Control and Prevention, John Nkengasong, tells reporters that Africa still has a "very good chance of beating back this virus" if authorities do the right things like test assertively.

But testing in Africa, with over 891,000 cases, is challenged by shortages of materials and sometimes weak health systems, and the International Rescue Committee warns "we are fighting this disease in the dark."

The Africa CDC director says more than 8 million tests have been conducted across the continent of 1.3 billion people, but the goal is 13 million tests per month.

Meanwhile, the health minister in South Africa's coronavirus epicentre, Gauteng province, has been forced to step down over corruption allegations related to government contracts for personal protective equipment.

The president's own spokeswoman has been placed on immediate leave over allegations that her husband's company was irregularly awarded PPE contracts in Gauteng.

MADRID — Spain is trying to persuade the British government to put some Spanish regions on its safe travel list.

González Laya told Radio Euskadi in an interview Thursday that some Spanish regions are not badly affected, and suggested Britain could allow "travel corridors" between those regions and the UK

But the Balearic Islands, including vacation hotspots such as Ibiza and Mallorca, had just one new case while the Canary Islands, another popular destination for British tourists, had only seven.

Spain is the top holiday destination for British tourists, with around 18 million people heading there last year, and their absence is a heavy blow to Spain's key tourism industry.

JOHANNESBURG — South Africa's confirmed coronavirus cases are now above 471,000 as the country with the world's fifth-largest confirmed caseload makes up well over half the recorded infections on the African continent.

Africa's 54 countries have a total of more than 891,000 cases as local transmission of the virus is underway in many countries. Severe testing shortages mean the real number of cases is likely much higher. South Africa is also seeing far more "excess deaths" than in recent years.

A new report by the South African Medical Research Council shows more than 22,000 excess deaths from natural causes between May 6 and July 21. Those could be unrecorded COVID-19 deaths or deaths from other diseases as some South Africans, scared by the pandemic, hesitate to seek care. Strained health resources are also being redirected to fighting COVID-19.

LONDON — The number of cars built in Britain dropped to its lowest level since 1954, as carmakers warned of a double whammy on the industry as the result of the coronavirus pandemic and the country's upcoming departure from the European Union.

The Society of Motor Manufacturers and Traders said 381,357 cars were built in the six months to June, a decline of 42 percent on the same period last year.

The hit on jobs was extreme, with the trade body reporting that 11,349 jobs have already been cut across manufacturing and retail during the pandemic with "more at stake without dedicated restart support as firms fear double whammy of Brexit tariffs.''

The SMMT appealed for urgency in talks to secure a deal with the European Union quickly.

NEW DELHI, India — India has registered more than 50,000 new coronavirus cases in the past 24 hours for the first time.

The Health Ministry also reported another 775 deaths in the past 24 hours, driving total fatalities up to 34,968.

The number of recoveries from the coronavirus in India has crossed 1 million.

India has reported the third most coronavirus cases in the world after the United States and Brazil.

The reported deaths from the virus in India, however, mark a far lower fatality rate than in the other two countries.

BEIJING — China is stepping-up testing for the coronavirus in an attempt to get a handle on new outbreaks that have defied the country's considerable success in containing the virus that was first detected in Wuhan late last year.

In the northeastern city of Dalian, local authorities have issued a letter to citizens urging all 5.6 million of them to be tested following consecutive days of new cases being reported, largely in the single digits.

As of midnight Wednesday, samples had been collected from more than 4 million people in the scenic port city in Liaoning province and a second round of tests was being launched targeting people living in what have been categorized as high-risk areas.

Masks have been compulsory in the state capital of Melbourne and a neighbouring semi-rural district for the past week. Victoria Premier Daniel Andrews said Thursday that masks or other face coverings will be compulsory for the whole state beginning late Sunday.

In addition, residents around the city of Geelong will not be allowed to have visitors in their homes beginning late Thursday.

Melbourne and neighbouring Mitchell Shire are halfway through a six-week lockdown, which Andrews says could be extended.

BEIJING — China is reporting 105 more confirmed cases of COVID-19, almost all of them in the northwestern region of Xinjiang.

Xinjiang accounted for 96 of the cases, with five others in the northeastern province of Liaoning and one in the capital of Beijing.The remaining three were brought by Chinese travellers arriving rom outside the country.

No new deaths were reported, leaving China's official toll for the pandemic at 4,634, among 84,165 cases.

While China has largely contained the virus in other parts of the country, the Xinjiang outbreak centred on the regional capital and largest city of Urumqi continues to grow. Authorities have locked down some residential neighbourhoods in the city, restricted public transit and ordered widespread testing.

SAO PAULO — Brazil's health ministry has reported a daily record 1,595 deaths from COVID-19, though the rise partly resulted from the country's most populous state reporting two days worth of deaths.

Brazil's previous one-day record death toll was set June 4, with 1,473 fatalities. Deaths have been ticking upwards for five straight weeks as the coronavirus spread into new regions, with deaths averaging more than 1,000 each day.

Authorities say the populous state of Sao Paulo did not report COVID-19 deaths Tuesday because of a counting glitch. As a result, its tally of 713 deaths Wednesday included two days of deaths.

Brazil's health ministry has recorded 90,134 deaths so far in the pandemic and more than 2.5 million confirmed cases. Those are the second highest totals in the world.

Boris Johnson says COVID-19 has been a disaster for Britain