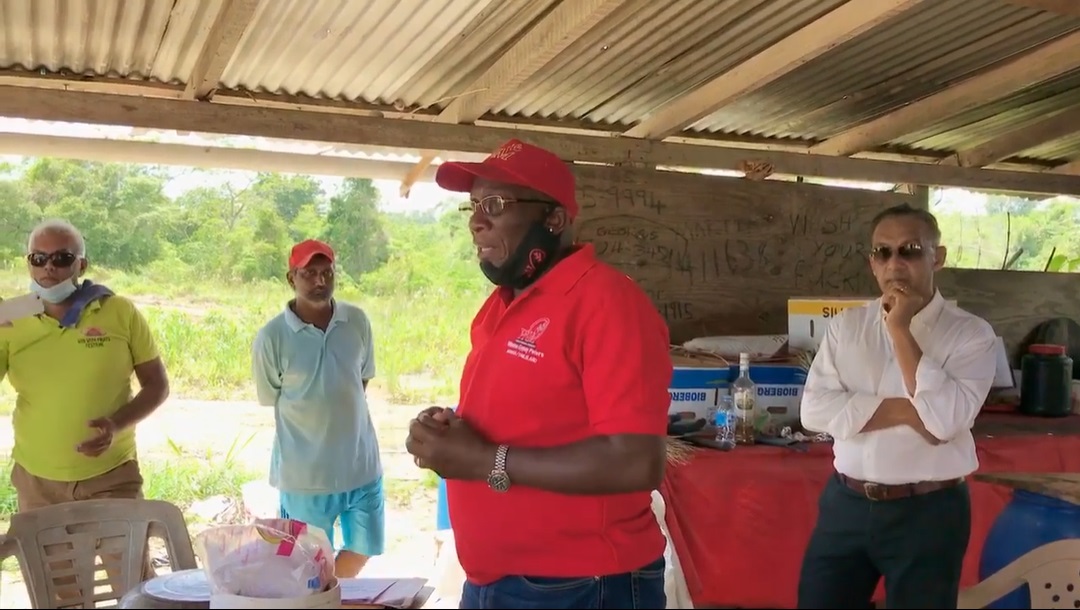 A listening Vasant Bharath (in white) stands behind Moruga/Tableland cadidate Winton 'Gypsy' Peters (in red) at a meeting in Moruga.

After a video being circulated on social media by former UNC Works and Transport Minister, Devant Maharaj, which shows his political colleague, Vasant Bharath, standing near the PNM’s candidate for Moruga/Tableland, Winston ‘Gypsy’ Peters, Bharath is defending himself.

Maharaj’s video captioned that Bharath was showing support for Peters, but in a Facebook statement, Bharath says that’s far from the truth.

“My visit to Moruga on Friday was solely to meet with the Tableland Pineapple Farmers regarding how they could utilise the Moruga Agroprocessing Facility. Mr Winston Peters turned up as a guest of the President and addressed the farmers. As over 50 farmers can attest, I made it VERY clear that we sat on different sides of the political divide and I was not there in any political capacity but only to assist them with understanding how the facilities could be taken advantage of and how they should ready themselves to serve both the local and export markets,” Bharath wrote.

Vasant is calling for more responsible behaviour to be observed as the election race beings to heat up.

“I know this is silly season where emotions run high and common sense and rational are thrown out of the window but let not silly be turned into stupid,” he said.

Both Bharath and Maharaj served as Ministers of Agriculture under the People’s Partnership administration between 2010 and 2015.

Bharath assured that other public sector services were present, such as representatives from Udecott, EMBD and Eteck.

He says the allusion that he’s switched alliances is unfortunate.

“It is regrettable that, because of the myopic, prejudiced and jaundiced views of some, I should have to defend my presence at such a meeting, where the ONLY intent was to assist farmers to better their circumstances,” he said.

Vasant on roadblocks: TTPS has my support

Devant loses: Judge rules he cannot be considered a journalist