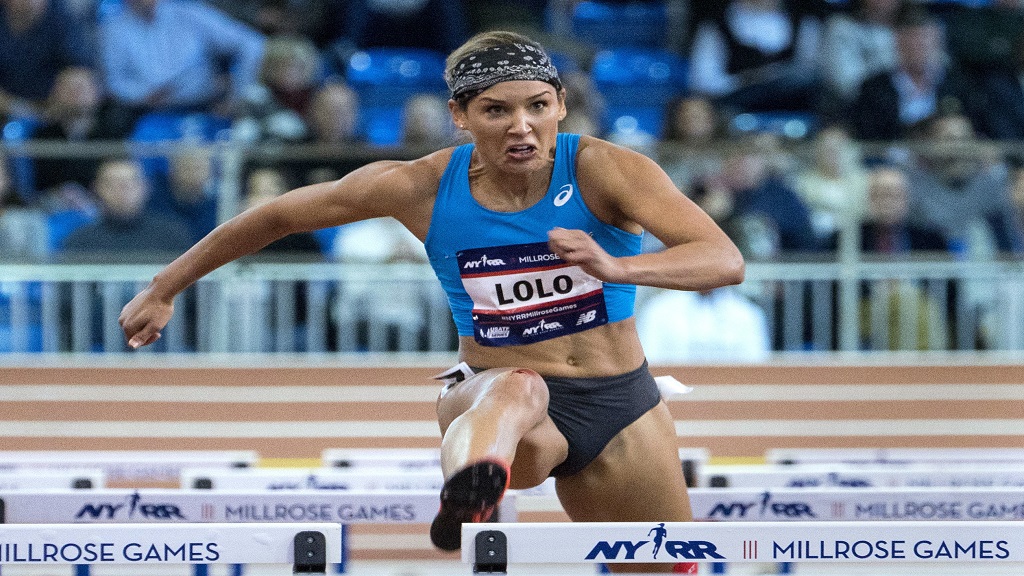 In this Feb. 3, 2018, file photo, Lolo Jones, of the United States, competes in the Howard Schmertz women's 60m hurdles at the Millrose Games track and field meet in New York. After competing in two Summer Olympics as a hurdler and one Winter Games as a bobsledder, Jones, 37, came into the year hoping for one more shot on the track. (AP Photo/Craig Ruttle, File).

Lolo Jones is 37 — angling for a comeback to the track and well aware that she's running out of time.

These days, though, earning a spot in the Tokyo Olympics is nowhere close to her No. 1 priority.

The hurdler-turned-bobsledder-turned celebrity, who remains one of the most recognizable and followed Olympic athletes in the United States, is imploring the International Olympic Committee (IOC) to send a different message from the one it has thus far about the coronavirus crisis. It has yet to postpone the games, set to start July 24, and by not doing that, Jones believes it is subtly — or not so subtly — telling athletes that they need to be ready, just in case.

“It's tearing athletes apart,” Jones said Saturday in an interview with The Associated Press. “We want to be like everyone else. We want to be healthy, responsible citizens. But we're also afraid the IOC is going to say, in a month, that the games are on, and, what, hopefully you're going to still be in shape?”

Some could be. Even more probably won't. Such is the state of sports across the globe, where different restrictions exist in virtually every country, and in every state in the U.S. Jones has access to a track near her home in Louisiana, but has been heeding the warnings of health officials and government, opting to shut things down.

“I fear contaminating my coach,” Jones said. “And I fear that we're not doing our due diligence, as athletes, to send the message: We need to be sticking in our house, self-quarantining. We've got bigger things to worry about right now” than training.

Before shifting her focus to bobsled, which allowed her to become one of the rare athletes to compete in both the Summer and Winter Games, Jones was a breakout star in the buildup to the Beijing Olympics in 2008. She caught her shoe on the second-to-last hurdle in the 100-metre finals and finished seventh — and in shock — in a race won by teammate Dawn Harper.

Four years later, Jones came into Olympic trials out of the top three in the rankings, not expected to make the team. She finished third at trials and made it back to the games.

It's those lessons — there's a reason they run the races — that also feeds into her desire to see Tokyo postponed. With each day that passes, there's an increasingly minute chance of a fair Olympic trials. USA Track and Field (USATF) long prided itself on taking the top three finishers in each event to the Olympics, regardless of their world ranking or past results.

She took heart in the letter USATF sent to the U.S. Olympic and Paralympic Committee on Friday, pressing for a delay.

“Our goal remains to achieve athletic excellence during the Olympic Games, but not at the expense of the safety and well-being of our athletes,” CEO Max Siegel wrote in the letter.

Which is Jones' point, too.

She said she understands why the outcry from athletes, though growing, isn't as huge as it could be. There are thousands of athletes across the globe who see this as their first, or last, or best, chance at Olympic glory — and who want to be given every opportunity to compete.

“It’s hard because obviously, these are dreams we’ve been fighting our whole lives for,” Jones said. “(Olympians) do it out of pure passion. They're the most devoted athletes in the world and we're trying to stay motivated and push through. But there's a human element to this. Seeing this virus kill, and destroy so many cities, it's hard to keep going on like nothing's wrong out there.”

Coronavirus: USA Swimming calls for Tokyo Olympics to be postponed