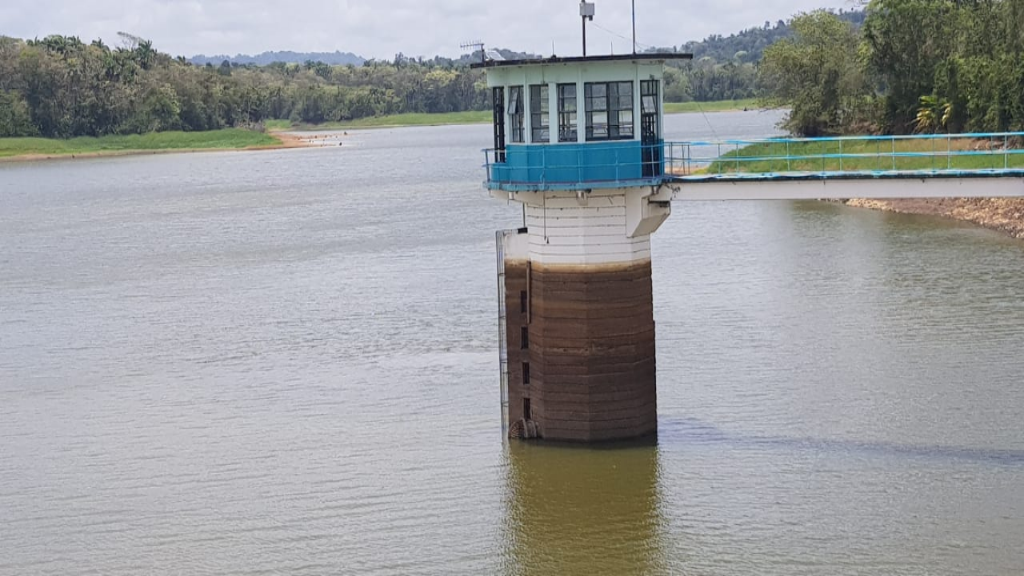 Photo: A photo shared by WASA via social media in April 2019 showed lower-than-normal water levels at the Navet Reservoir.

With reservoirs already below average levels, the Trinidad and Tobago Meteorological Service is warning of below-normal rainfall during the period March to May, 2020.

The Met Office said in its Rainfall and Temperature Outlook Update for March to May 2020 there’s a 70-80% chance of at least three seven-day dry spells are expected along with below-normal rainfalls.

The outlook added that warmer than average days and nights are expected over the three months with increased chances of hot days (greater than or equal to 34’C in Trinidad and 32’C in Tobago) and hot spells (5 or more consecutive hot days) (high confidence).

Areas which would see a below-average rainfall include central and south Trinidad and Tobago.

The Met Office said, as a result, there may be a further reduction in groundwater recharge, surface water flows and faster depletion of large water reservoirs.

There may also be a higher risk of bush, landfill and forest fires, and reduced air quality as a result.

The Met Office warned these periods of excessive heat can increase heat stress for persons with heat-sensitive ailments and for heat-exposed livestock, pets and other animals.

The Met Office said a revisit of dry season contingency plans is needed, along with an upgrade based on historical extremes and not historical averages.

However, the Met Office said the early outlook for June to August 2020 suggests that Trinidad and Tobago is likely to see above-average rainfall totals during the first half of the 2020 wet season.