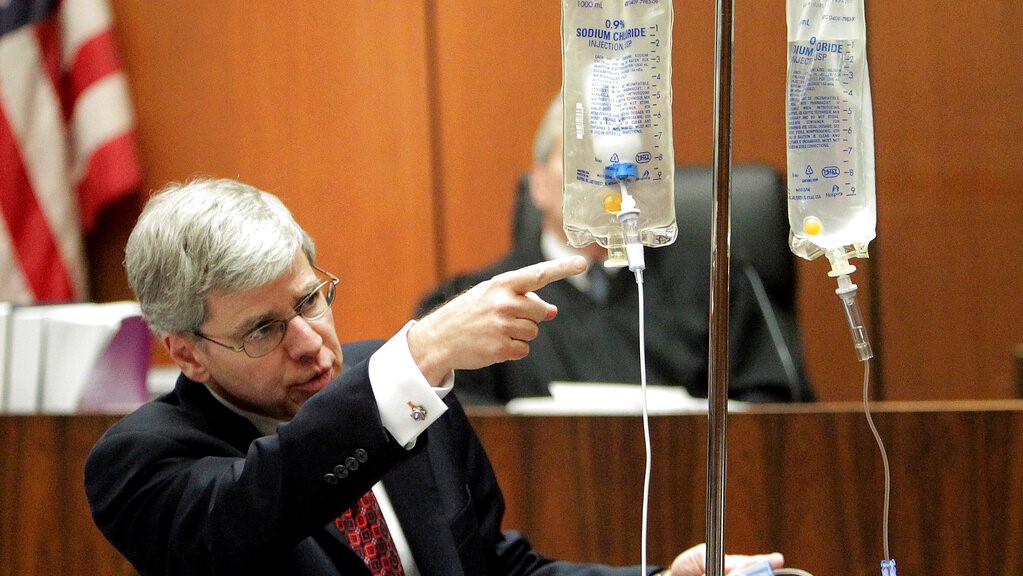 In this Thursday, Oct. 20, 2011 file photo, anesthesiology expert Dr. Steven Shafer demonstrates the use of propofol after placing a bottle of the drug in an empty saline bag during Dr. Conrad Murray's involuntary manslaughter trial for Michael Jackson's death in Los Angeles. (AP Photo/Reed Saxon, Pool)

It remains the most widely used anaesthetic in U.S. hospitals, but many patients still remember propofol as the drug that killed Michael Jackson.

Most are no longer afraid of it, doctors say, though many still ask if they will get "the Michael Jackson drug" before an operation. And most of them will.

Jackson died 10 years ago at his Los Angeles home after receiving a lethal dose of the drug intended for use only during surgery and other medical procedures — not for insomnia.

As Jackson rehearsed for his comeback tour, he struggled to sleep. Prosecutors said Jackson's personal doctor Conrad Murray gave the singer propofol, as he had many times before, then left him unattended. Murray, who maintains his innocence, was convicted of involuntary manslaughter in 2011.

A look at the history and safety of propofol:

Jackson called propofol his "milk." It's a white, oily solution injected into a vein. It acts fast, in about 40 seconds, and wears off quickly too. Patients wake up with no hangover or nausea. They don't remember much, earning the drug its nickname "milk of amnesia."

Propofol was a noteworthy advance when it was launched in the late 1980s, but it almost didn't make it out of the lab. An early version caused allergic reactions.

The World Health Organization deemed it an "essential medicine." Glen, who retired from the pharmaceutical firm AstraZeneca, was honoured with the prestigious Lasker medical research award last year.

HOW SAFE IS IT?

Because propofol lowers blood pressure and suppresses breathing, patients need to be monitored.

These days, patients aren't as afraid of going under, she said. "Now it's more of a matter of curiosity rather than being afraid for their own safety."

Dr. Steven Shafer of Stanford University, a propofol expert who testified at Murray's trial, endorses the appropriate use of propofol.

"Michael Jackson was killed by a reckless and incompetent physician," he said.

Police rarely encounter the drug. It's not a controlled substance under federal law.

There's little abuse in the general public. Almost all cases involve health care workers. They steal it at work to get a pleasant but dangerous high. At least 18 deaths were reported among medical professionals from 1992 to 2009.

University of Utah psychiatrist Dr. Brian Mickey is studying propofol for depression in people who don't get relief from medications or psychotherapy. Other treatments may include brain stimulation such as electroconvulsive therapy, but that can have side effects such as confusion and memory loss.

Mickey and his colleagues published a preliminary study last year that tested a series of high doses of propofol in 10 patients with moderate to severe depression. Half improved and maintained better moods for three months.

Now the researchers are planning a larger study that will test propofol against a sedative called midazolam.

Mickey doesn't know how propofol may help depression but said it may be triggering the brain to reorganize itself. It may be "coaxing the brain into getting unstuck from this bad, depressed state that it's in," he said.

The study was done in a hospital with an anesthesiologist giving propofol through an IV.

"Don't do this at home," Mickey said.