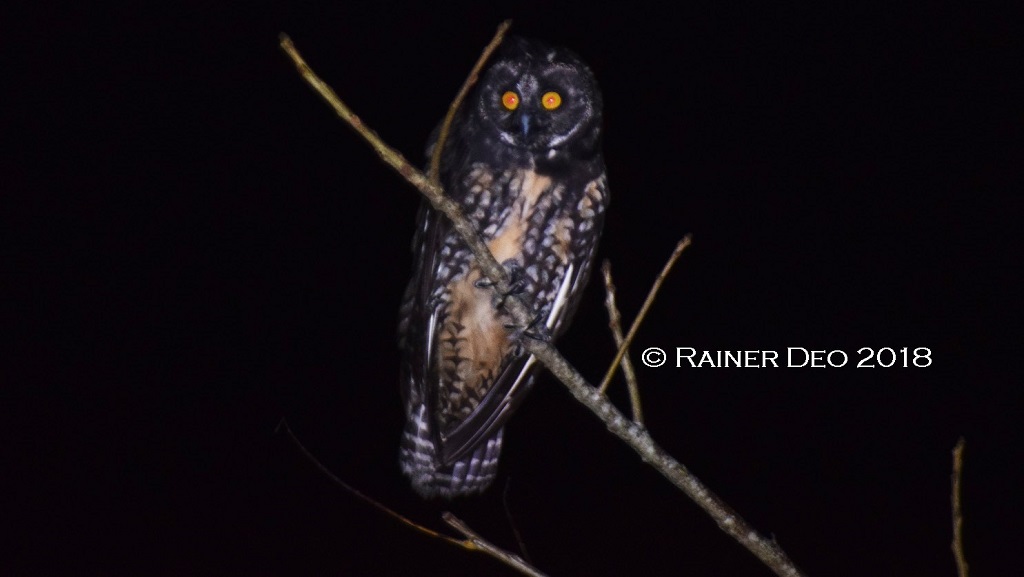 Photo: The Stygian owl, documented in Trinidad and Tobago for the first time in 2018 by Hukaymah Ali and Rainer Deo. Photo courtesy Rainer Deo.

A search for various snake species at the Caroni Wildlife Sanctuary turned out to be something entirely different for two conservationists.

Wildlife rehabilitator and conservationist with the El Socorro Centre for Wildlife Conservation, Hukaymah Ali, told Loop News that the discovery took place in 2018 while she was exploring the Caroni Wildlife Sanctuary with fellow conservationist and photographer, Rainer Deo.

She and her colleagues formed a group called West Indian Herping to educate people about snakes (herpetology is the study of reptiles and amphibians).

She said they were out at night when they received a shock.

‘It was a typical night, we went to the Caroni Bird Sanctuary and were just looking to see what types of snakes we could find.’

‘We looked up and saw this huge owl; and we were like, what is that?’

She said Deo managed to pull out his camera and quickly snapped a photo before the owl flew away.

‘My friend who is a photographer quickly pulled out his camera and took a photo before it flew off. We tried to figure out what owl it was; we thought it was a species that we already have.’

However, after trying to research what species of bird it was, they made a huge discovery.

‘We used an app called iNaturalist which helps you to identify various species, and someone who is a specialist in owls reached out to us and told us that it’s a species that new to Trinidad.’

She said researchers from the University of the West Indies helped them with the submission of the documentation, which was submitted for approval.

According to the study, published in ‘The Living World’ by the Trinidad and Tobago Field Naturalists’ Club, this is the first time the Stygian owl (Asio stygius) has been seen in Trinidad.

According to the study it was identified as A. Stygius by Dr Christian Artuso.

The Stygian owl is found in parts of South and Central America and other Caribbean islands such as Cuba but this is the first time it has been documented in Trinidad and Tobago.

Ali said it also shows that there is so much more to learn about wildlife in Trinidad and Tobago’s forest spaces, which must be protected.

‘Every time we explore nature, we are always finding something new…we have pristine forests which are affected by illegal development, we could be losing a lot of new species.’

‘We have a lot of wildlife in Trinidad and we have to protect it.’

She said her group also wanted to do nature tours to help educate people about various species, however since the COVID-19 pandemic, they have opted to share their videos online.

She said they also have no sponsors at the moment and are doing their best with their own funds.

For now, she said they will continue to spread the word about the country’s wealth of wildlife in the hope that it can help change the way people view development.

‘There are so many sustainable ways to develop our home, it’s just about education. We’re trying to educate people and show them that you don’t have to destroy to develop. We can work with nature and it will be so much better.’