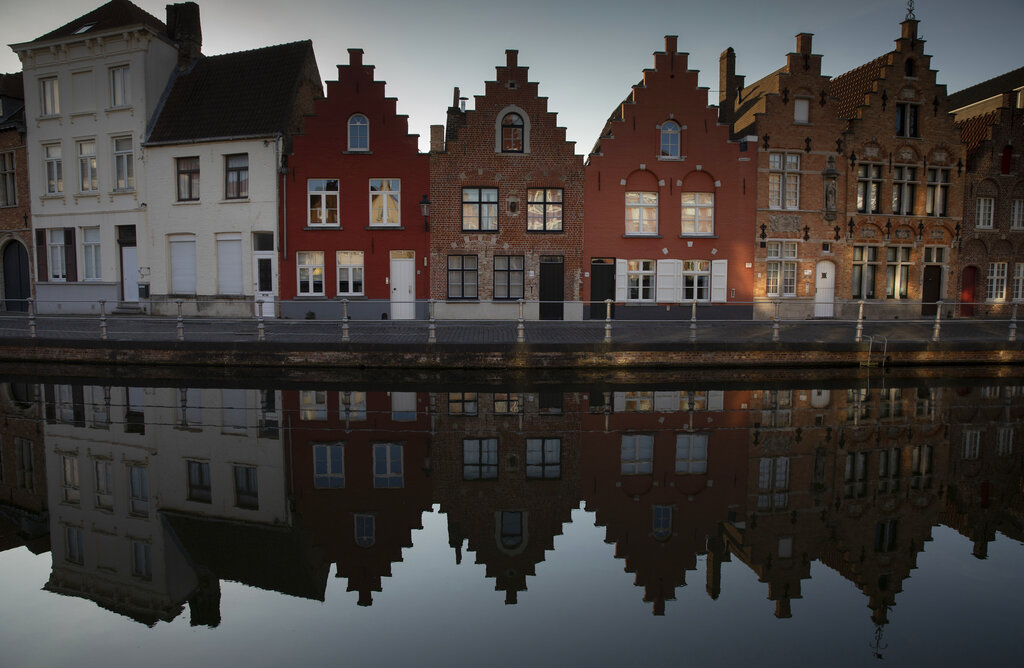 Houses make a reflection on the water in Bruges, Belgium, during a partial lifting of a lockdown to prevent the spread of coronavirus, COVID-19, Wednesday, May 13, 2020. Coronavirus lockdown restrictions have damaged the tourism industry in many European countries and left travelers wondering what restrictions will still be in place during the summer season. (AP Photo/Virginia Mayo)

New coronavirus clusters have popped up as nations struggle to balance reopening economies with preventing a second wave of infections and deaths, while in Europe, a debate erupted Wednesday over the summer travel season.

Authorities in the Chinese city of Wuhan, where the pandemic first began late last year, reportedly were pressing ahead Wednesday to test all 11 million residents within 10 days after a handful of new infections were found.

In Lebanon, authorities reinstated a nationwide lockdown for four days beginning Wednesday night after a spike in reported infections and complaints from officials that social distancing rules were being ignored.

Despite the risks that loosening restrictions could lead to infection spikes, European nations have been seeking to restart cross-border travel, particularly as the summer holiday season looms for countries whose economies rely on tourism.

The European Union unveiled a plan to help citizens across its 27 nations salvage their summer vacations and resurrect Europe’s badly battered tourism industry after months of coronavirus lockdowns. The pandemic has prompted border closures across Europe and shut down its lifeline of cheap local flights.

The EU’s executive arm, the European Commission, laid out its advice for lifting ID checks on hastily closed borders, helping to get airlines, ferries and buses running while ensuring the safety of passengers and crew, and preparing health measures for hotels to reassure clients.

It's not clear whether EU nations will follow that advice, since they, not Brussels, have the final say over health and security matters.

Some European countries have sought bilateral agreements with their neighbors.

Austria said its border with Germany would reopen fully on June 15 and border checks would be reduced starting Friday. Chancellor Sebastian Kurz said Austria was aiming for similar agreements with Switzerland, Liechtenstein and its eastern neighbors "as long as the infection figures allow.”

German Foreign Minister Heiko Mass said his country will lift a blanket warning against foreign travel to European destinations before other places, such as Asia or North America, but didn't specify when. Germany’s warning against all non-essential tourist travel abroad runs until June 14.

“It will certainly be possible to lift the travel warning earlier for Europe than for other destinations – so long as the current positive trend in many countries solidifies,” Maas said. “Freedom to travel is part of the foundation of the European project, but in times of corona, Europe must ensure more: the freedom to travel safely."

The border shutdowns have hit the European travel industry hard. The Germany-based tour and hotel operator TUI said Wednesday it expects to cut thousands of jobs due to the pandemic.

TUI said it was “prepared for a resumption” and its first hotels on the German coast would reopen in the coming days. It also envisioned offering holidays in Spain’s Balearic islands and in Greece starting in July, the German news agency dpa reported.

As long as new infections remain relatively low, there is “no reason why one shouldn’t be able to travel there,” TUI CEO Fritz Joussen said – but local companies and hotels need to be open.

Norway said Wednesday it was opening its borders to EU citizens who have a residence there or have family they want to visit, seasonal workers and people from the UK, Iceland and Liechtenstein.

The tensions in balancing people’s safety from the virus against the severe economic fallout are playing out across the world. Italy partially lifted lockdown restrictions last week only to see a big jump in confirmed coronavirus cases in its hardest-hit region. Pakistan reported 2,000 new infections in a single day after crowds crammed into local markets as restrictions were eased.

The United States’ top infectious disease expert issued a blunt warning that cities and states could see more COVID-19 deaths and economic damage if they lift stay-at-home orders too quickly.

“There is a real risk that you will trigger an outbreak that you may not be able to control,” Dr Anthony Fauci said Tuesday after more than two dozen US states began to lift their lockdowns.

His testimony at a Senate hearing was a sharp pushback to President Donald Trump, who wants businesses to reopen amid a free-falling economy that has seen 33 million Americans lose their jobs. The US has the largest coronavirus outbreak in the world by far: 1.37 million infections and over 82,000 deaths, according to a tally by Johns Hopkins University that experts say understates the true toll of the pandemic.

Fauci said more infections and deaths are inevitable as people start gathering again, but how prepared communities are to stamp out those outbreaks will determine how bad the rebound is.

Fauci expressed optimism that vaccines will arrive eventually, along with more tailored treatments for COVID-19 patients. But he said it would be “a bridge too far” to expect them in time for the fall, when most schools and universities hope to reopen.

China, the first nation to put a large number of citizens under lockdown and the first to ease those restrictions, has been strictly guarding against any resurgence. In January, it put Wuhan and the surrounding region, home to more than 50 million people, under a strict lockdown. A cluster of six new cases recently emerged, the first local infections in Wuhan since before the lockdown was eased in early April.

Worldwide, the virus has infected more than 4.2 million people and killed 292,000, according to the Johns Hopkins tally. Experts say the actual numbers are likely far higher.

Elsewhere, there was progress. New Zealand reported no new cases Wednesday for the second consecutive day, and Thailand's health authorities also reported no new confirmed cases for the first time in more than two months, and no new deaths. Restaurants in Bangkok allowed to reopen last week under social distancing rules.

Japan was considering partially lifting its nationwide state of emergency ahead of its scheduled May 31 expiry date amid signs of slowing infections.

Prime Minister Abe Shinzo says he will make an decision after consulting with a panel of experts before his announcement Thursday.

Japanese media said the state of emergency was expected to be lifted in more than 30 prefectures where new cases have decreased. Restrictions will remain in Tokyo and its neighboring areas as well as Osaka, where medical systems are still under pressure.

Expert warns many countries are driving blind as they reopen