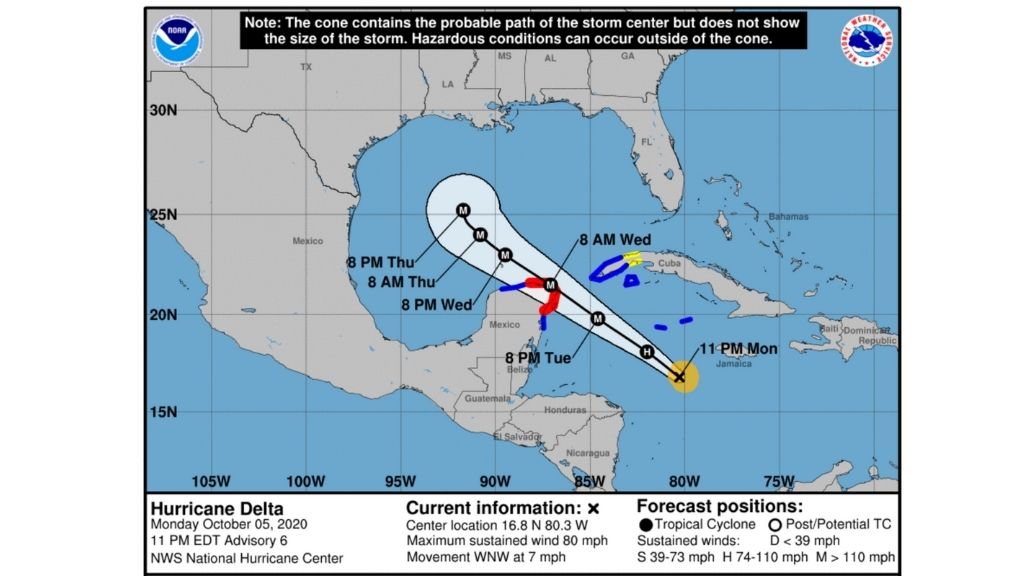 The National Hurricane Center, according to its 11pm EDT advisory, says Delta is an 80-mph Category 1 hurricane moving west-northwest at 7 mph. It is located about 170 miles southwest of Negril, Jamaica and 180 miles south-southeast of Grand Cayman. Cayman remains under a Tropical Storm warning.

The center of Hurricane Delta is located near latitude 16.8 North, longitude 80.3 West. Delta is moving toward the west-northwest near 7 mph (11 km/h). A faster northwestward motion is expected Tuesday through Wednesday night. Government advises that cloudy, rainy conditions along with intermittent thunder storms are to be expected.

On the forecast track, the center of Delta is expected to pass southwest of the Cayman Islands early Tuesday. Tropical storm force winds are expected at around 8am and are expected to decrease through the afternoon. Showers may become heavy at times, leading to low visibility and possible flooding of low lying areas. Gusty winds and rough seas are expected in and around heavy showers.

This increases the likelihood that the Islands will be impacted by tropical storm force winds, although forecasters say the storm’s track is still changing. Furthermore as a result of the change in direction, increasing wave action is expected on the south and west coasts as the hurricane moves past.

Data from an Air Force Reserve Hurricane Hunter aircraft indicate that the maximum sustained winds have increased to near 80 mph (130 km/h) with higher gusts. Additional rapid strengthening is expected during the next day or so, and Delta is expected to be a major hurricane when it nears the Yucatan Peninsula.

A dangerous storm surge will raise water levels by as much as four to seven feet above normal tide levels along coast of the Yucatan peninsula within the hurricane warning area, near and to right of where the center makes landfall. Near the coast, the surge will be accompanied by large and dangerous waves.

Delta is expected to produce two to four inches of rain, with isolated higher amounts, across portions of Jamaica, the Cayman Islands and western Cuba through midweek. This rainfall may result in areas of flash flooding and mudslides.

Persons are advised to avoid the shoreline for the next 48 hours and to assess how rough seas may impact their plans for shelter during the storm. The Red Cross Shelter on Huldah Avenue opened at 7pm and all other shelters are on standby if needed.

Delta is expected to produce four to six inches of rain, with maximum rainfall as high as 10 inches possible, across portions of the northern Yucatan Peninsula through mid week. This rainfall may result in areas of significant flash flooding.

The government of Cuba has replaced the Hurricane Warning with a Tropical Storm Warning for the province of Pinar Del Rio and discontinued the Hurricane Watch for the province of Artemisa and the Isle of Youth. The government of Mexico has issued a Tropical Storm Warning from Punta Herrero northward to Tulum and from Rio Lagartos westward to Progresso.

Later this week into the weekend, Delta is expected to bring heavy rainfall across portions of the central Gulf Coast into the southeastern United States.

Tropical Storm Delta has been upgraded to a Category 1 Hurricane