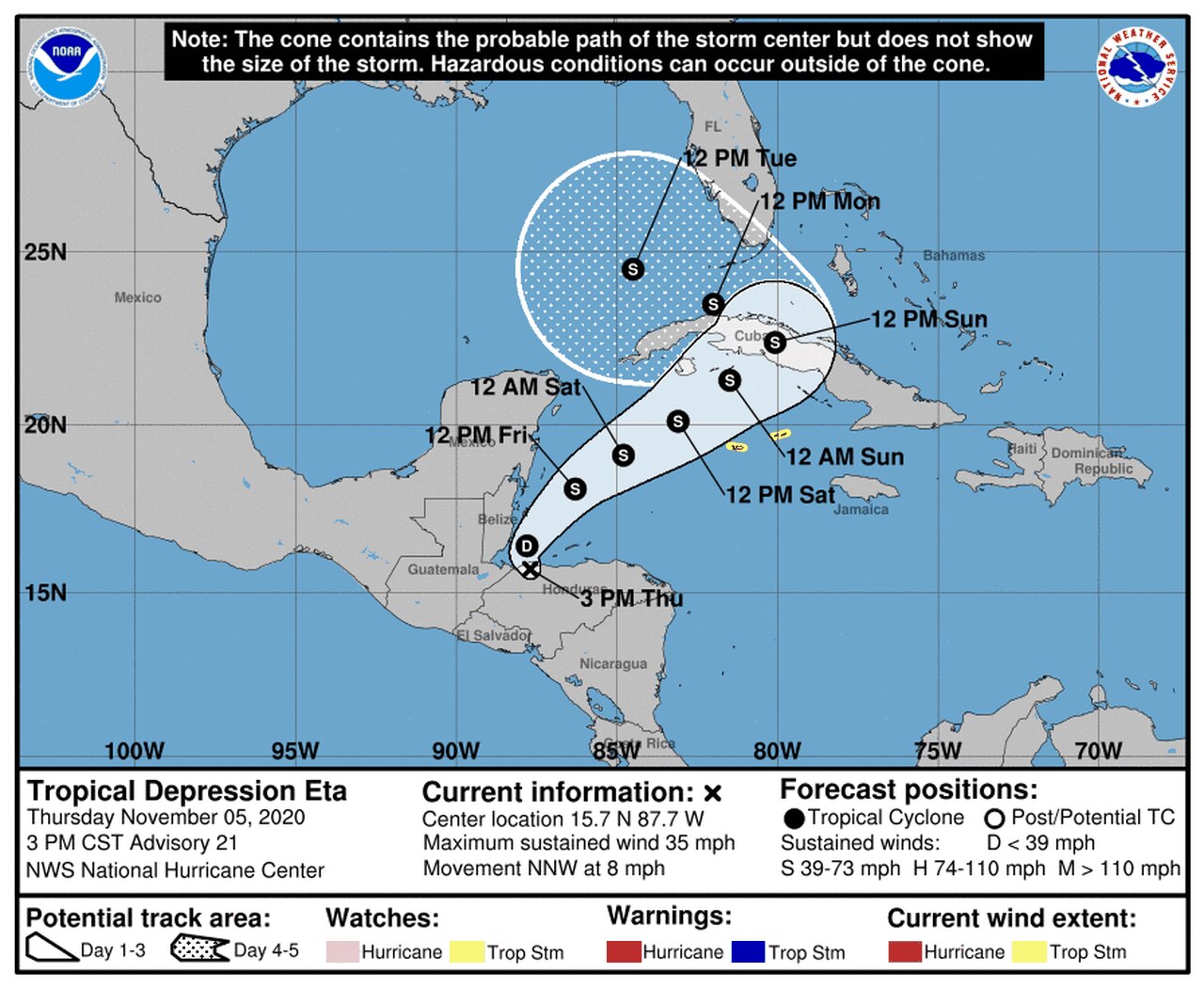 In its 3pm update on Thursday, the National Hurricane Center indicated that a Tropical Storm Watch has been issued for the Cayman Islands, signifying that tropical storm conditions are possible within the area within the next 48 hours. Tropical storm watches may be coming for Cuba later tonight or on Friday.

Across Nicaragua, Honduras, Guatemala and Costa Rica, high winds and heavy rain have damaged homes, roads and bridges, forcing thousands to take cover in shelters. Eta was moving northwest through Honduras toward the Caribbean, at eight miles per hour (13 kph) on Thursday. Eta is forecast to return to sea, moving back into the Gulf of Honduras by tonight, and regain momentum as a tropical storm on Friday, possibly reaching the Cayman Islands, Cuba and southern Florida in the coming days, the NHC said.

The Cayman Islands National Weather Service has consequently issued a Severe Weather Advisory for the Cayman Islands. Torrential showers and flooding is very likely for Friday with an increase of winds to tropical storm strength, leading to very rough seas.

The official NHC track places Tropical Storm Eta some 79 miles to the W of Grand Cayman, 146 miles WNW of Cayman Brac, by Saturday afternoon and over central Cuba by Sunday morning. On its current forecast path, Eta is expected to briefly support tropical storm force winds over the Cayman Islands by Saturday afternoon.

Flood and marine warnings are in effect for the Cayman Islands.

The Minister for Education, Youth, Sports, Agriculture and Lands Honourable Juliana O’Connor-Connolly, has advised that government schools will close tomorrow, Friday November 6 due to the inclement weather.

Exercise increased caution on flooded roads. Excessive rain has led to numerous potholes opening up, and the flood waters make these more difficult to detect. Periods of torrential rainfall will result in limited visibility on the roads.

Residents are encouraged to limit travel on the roads to essential journeys from late Friday and into Saturday.

Wave heights are forecast to reach 5 to 7 feet on Friday, and 7 to 9 feet on Saturday. Large waves are forecast to begin affecting the west side of Grand Cayman beginning on the weekend (likely Sunday). A Marine Warning is Effect for Thursday and Friday. All vessels should be in Safe Harbour on Saturday.

Strong and gusty winds (possibly reaching tropical storm force at times) are forecast for late Friday and through Saturday. The saturated state of the ground could lead to a higher likelihood of some trees toppling.

Emergency Shelters remain closed, however the Red Cross Shelter is on standby. Other shelters are being prepared should the need arise as a result of localised flooding.

Eta expected to reintensify in NW Caribbean, what it means for Cayman