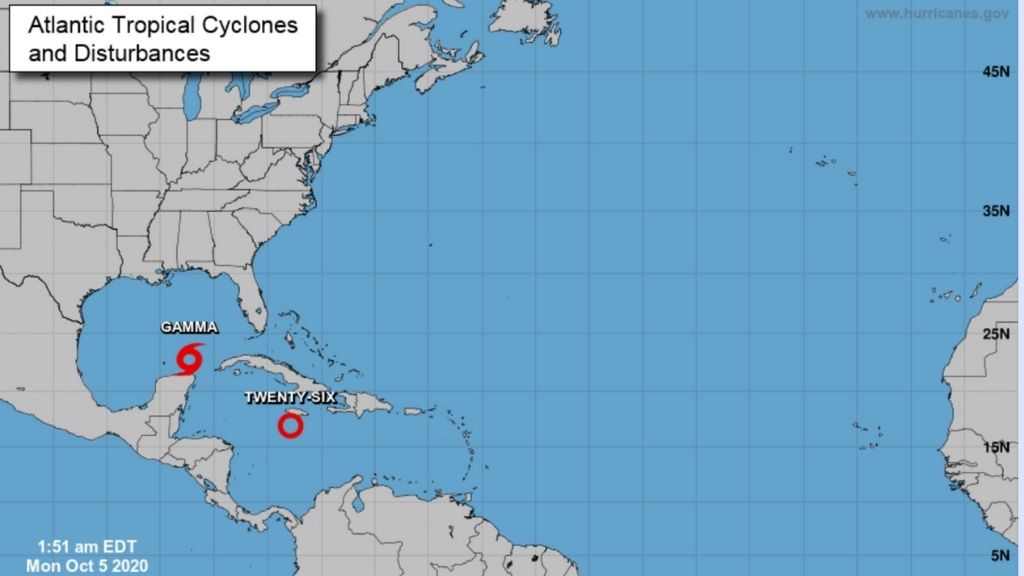 Meteorologists continue to monitor Tropical Depression Twenty-six (formerly Invest 92L and Potential Tropical Cyclone 26) that is expected to create tropical storm conditions in the Cayman Islands later today and is forecast to become a hurricane when it moves near or over western Cuba on Tuesday.

At 1:00 am, the center of Tropical Depression Twenty-Six was located near latitude 16.9 North, longitude 77.8 West. The depression is moving toward the west-northwest near 9 mph (15 km/h), and this general motion should continue for the next day or so. A faster northwestward motion is expected on Tuesday and Wednesday.

On the forecast track, the center of the depression is expected to pass just south of Jamaica through this morning, move near or over the Cayman Islands later tonight, and approach the Isle of Youth and western Cuba Tuesday afternoon or evening. The tropical cyclone is forecast to move into the southeastern Gulf of Mexico Tuesday night or early Wednesday.

Maximum sustained winds are near 35 mph (55 km/h) with higher gusts. Strengthening is expected during the next few days, and the depression is forecast to become a tropical storm when it nears the Cayman Islands later today, and be a hurricane when it moves near or over western Cuba on Tuesday.

Around the time the depression is expected to be near western Cuba, the models show it accelerating northwestward as it moves in the faster flow between the ridge and Tropical Storm Gamma. This motion should bring the tropical cyclone into the southern Gulf of Mexico Tuesday night or early Wednesday.

Later on, a notable slow down and a turn to the north is forecast to occur late in the week when the depression will likely be approaching the northern Gulf coast. This change in the forecast motion is a result of the ridge weakening and a trough approaching the cyclone from the west.

The models are in relatively good agreement, which is surprising since they often diverge for weak systems, and the NHC track forecast lies near the middle of the guidance envelope.

1. Tropical storm conditions are expected in the Cayman Islands beginning late Monday, and a Tropical Storm Warning is in effect.

2. Dangerous storm surge and hurricane conditions are possible in portions of western Cuba and the Isle of Youth by Tuesday afternoon, and a Hurricane Watch is in effect.

3. Heavy rainfall will affect portions of Hispaniola, Jamaica, the Cayman Islands, and western Cuba during the next few days and could lead to life-threatening flash floods and mudslides.

4. The system is forecast to approach the northern Gulf Coast late this week as a hurricane. While there is large uncertainty in the track and intensity forecasts at these time ranges, there is a risk of dangerous storm surge, wind, and rainfall hazards along the coast from Louisiana to the western Florida Panhandle. Residents in these areas should monitor the progress of the system and check for updates to the forecast during the week.

HSA announces changes to operating hours due to Tropical Storm

WATCH: Here's the latest on the potential tropical cyclone over Cayman