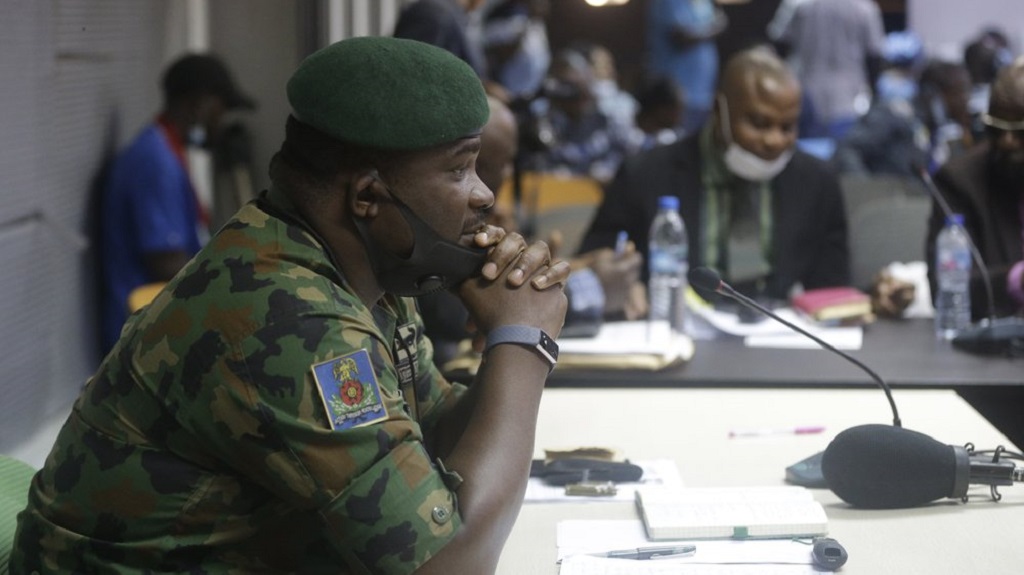 In this photo taken on Saturday Nov. 14, 2020. Brig. Gen. Ahmed Taiwo, Commander of the 81 Military Intelligence Brigade, pauses as he speaks to a judicial committee, in Lagos Nigeria. Nigeria's army has said after weeks of denial that its troop did fire shots into the air to disperse a large crowd at the Lekki Toll Plaza in Lagos where several peaceful protesters were killed late in October. (AP Photo/Sunday Alamba)

The Nigerian Army has admitted for the first time that soldiers were given live bullets when they went to disperse a large crowd at the Lekki Toll Plaza in Lagos, where several peaceful protesters were killed in late October.

The deadly October 20 shootings at the plaza caused both local and international outrage. At least 10 people protesting police brutality were killed in the Lekki Plaza shooting, according to Amnesty International, which charged that army troops opened fire on protesters without provocation. The government said two people died and 20 were hospitalized.

"The soldiers, they were given both live and blank bullets. In this particular case, we saw that these protests had been infiltrated by some hoodlums," he said, adding that the live bullets were for a backup.

Last weekend he testified that blank ammunition was fired upward to scare "hoodlums from the crowd," but insisted that soldiers did not fire at protesters.

The crowd of mainly young Nigerians were singing the country's national anthem and waving its flags as they peacefully protested against police brutality under the hashtag #EndSARS.

The army had initially maintained that its troops were not at the site of the shooting, but later admitted they were deployed.

A judicial panel has begun investigating the shooting. The panel is also investigating allegations of abuse against the police unit, the Special Anti-Robbery Squad, known as SARS.

There are calls for the International Criminal Court to carry out an inquiry into the protest deaths, the latest a petition signed by 154 organizations.

Akinbode Oluwafemi, head of the group Corporate Accountability and Public Participation Africa, told the Associated Press the petition was submitted Friday to the court in The Hague, Netherlands.