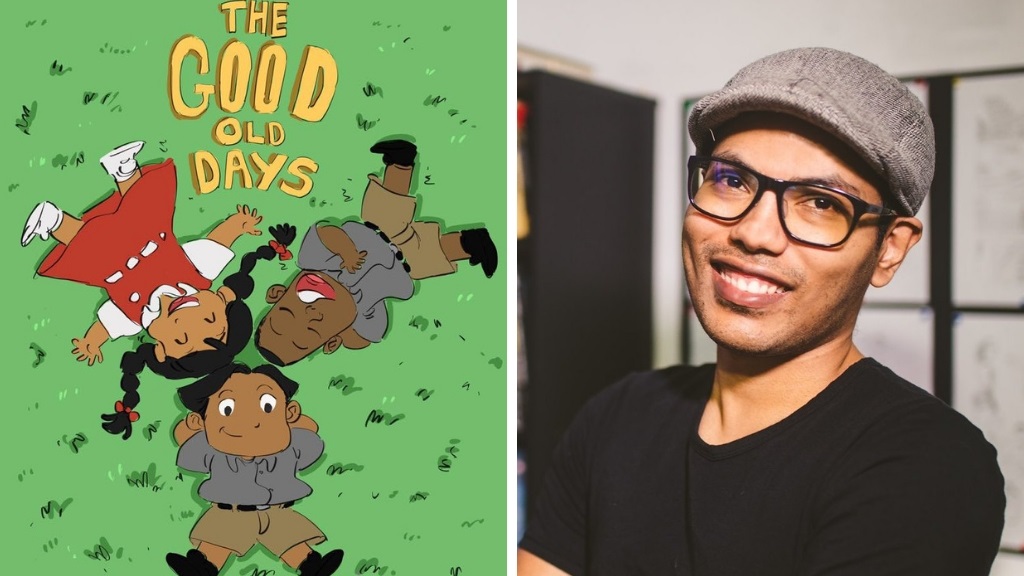 Remember, playing in the yard after school, school recess, making friends and having adventures? Remember the good old days?

That’s the theme of artist Rajendra Ramkellawan’s comic, ‘The Good Old Days’, which focuses on the growing pains of Andy, Lily and Jordan as they go through life as children in Trinidad and Tobago.

Ramkellawan, an illustrator and caricaturist, told Loop News his idea for the comic developed over time, based on his memories and stories told by friends about childhood days growing up at home.

He said after getting a tablet he was able t be much more flexible when making sketches as he could be mobile and sketch wherever he went.

He began by making screenshots of life in Trinidad and memories which stood out to him.

“I began doing little one shot stories about life as someone in Trinidad, it didn’t have any ongoing characters. It was about me experiencing different situations in Trinidad.”

As his stories developed, people began to connect with them, seeing commonalities in their childhood experiences.

He said he stumbled on a school memory about ‘sweaty back’, referring to when children come back to class after playing games during lunch break. 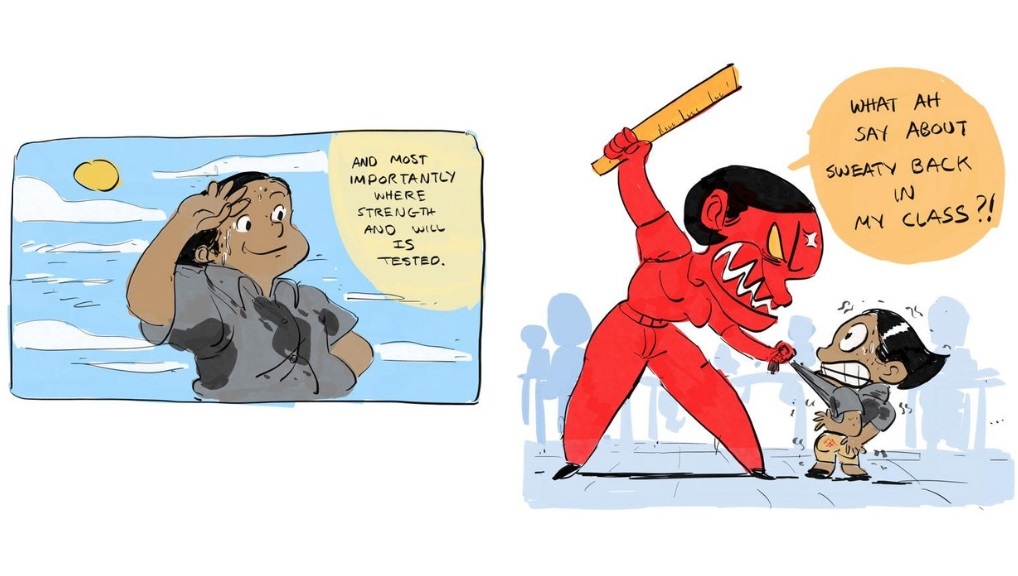 The story was a hit and took off, to his delight.

“When I made that strip so many people connected with that, that nostalgia, I realised that I could actually develop these characters. The place that memory came from, there are a lot more memories there, and it could fit into my style of storytelling.”

Andy, Lily and Jordan get into many different adventures that many Trinidadian children can connect with, from dealing with bullies, to using public transport, to finishing up homework, and even the annual dress-down day.

Andy, the protagonist, often finds himself in some sticky (and sweaty) situations, many of which he has to overcome, to the delight of readers.

Ramkellawan said he wanted the character to be realistic, and in real life, learning often happens after making mistakes.

“Children, growing up, aren’t bad or good, they’re on the fence, and you have to teach them how to make choices and live with those choices – that’s part of growing up.”

“For the kids reading these comics, I want them to know that you might have feelings to do naughty things, but it is better to be kind and do the right thing. No one does the right thing all the time but they have to grow to be good. 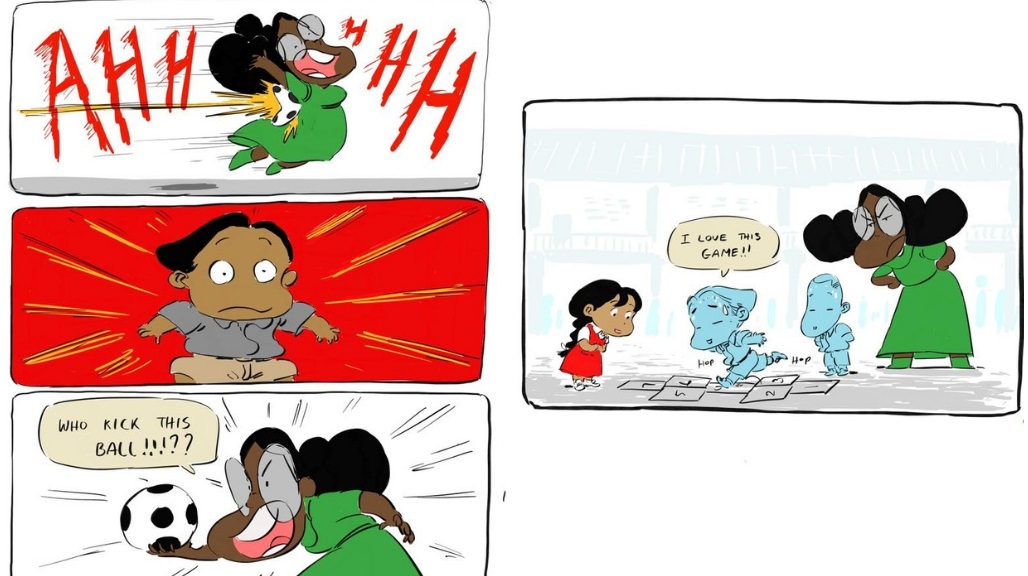 He said Lily is a genuinely innocent, caring character, who helps give Andy balance and direction, while Jordan is his best friend.

“Lily is this really kind, judgemental, pure girl, she’s the purest of all the characters, she kind of keeps Andy from being 100 percent bad,” he laughed.

“Lily really is that good and nice, and Jordan is the best friend that has your back and even gets in trouble with you sometimes.”

Ramkellawan said he wants his comic to show Trinis that they have much more in common than they think.

“With my type of storytelling, I like to remind people that we are all the same and we all go through the same experiences. When we think back to when we were small, we think it only happens to us but when I write people say ‘oh my God, this same thing happened to me’.”

“I cherish those comments because that’s what I want people to realise.”

He said he has been blown away by the response.

“I love the feedback, it takes people back to their pasts and the nostalgia. It gives me motivation to keep writing and sometimes I go back and read the comments, where people say they want to read more.”

The importance of representation

Ramkellawan said that since doing the comic he has realised how important it is to have representation in local stories.

“When I was younger I always felt I needed to create characters that were really flashy, like Japanese or American comic character. But the older I grew, the more I realised that in Trinidad and Tobago we have stories we can tell because at the end of the day we’re all human.”

“To be honest when I was younger, I didn’t think representation was that important. I thought that if they do the right thing it doesn’t matter what they look like. But as I got older, seeing other people who are mixed like me on television, I see why it’s so important.”

He referenced South Korean director Bong Joon Ho, who won an Academy Award in 2019 for 'Best Picture' and felt empowered knowing that it is possible to achieve great things even for smaller nations.

“There’s a feeling when you see someone like you and being able to see and feel those experiences, it felt good knowing that someone from a small nation could achieve something like that. It means we can do it too.”

About the famous (infamous?) bank sketches

Ramkellawan added he had no idea his sketches of local banks would go viral. The sketches, he said, were simply creations based on his own personal experiences with various banks, however the sketches went viral online with thousands of shares.

“My dad is always stuck in long bank lines, and when I was a teenager I had a traumatic experience with being forced to take off my hat, I had no idea it would take off like that,” he laughed.

Ramkellawan said he is working toward creating a book with a collection of all of his favourite comic strips from The Good Old Days, which people can order online.

“I’m hoping for a book toward the end of the year that people can buy online."

He also hinted at the possibility of an animated version of the comic but said it is still early days yet as nothing has been confirmed.

Ramkellawan said he is also offering an online mentorship programme to young artists seeking ways to develop their skills.

The three-month programme, he said, will help artists fine-tune their skills toward the completion of a personal project.

“I train them one on one and teach them the various skills, I try to help with their personal challenges and give them tips to push them forward. It’s like coaching for people who want to get into this but don’t have anyone in their corner to help them out.”

He is also still offering illustration services for events and on commission; for more information visit https://www.facebook.com/emotionillustration/

35 artistes unite in song to promote peace in T&T

'Our heart breaks': South digs out from Zeta's wrath