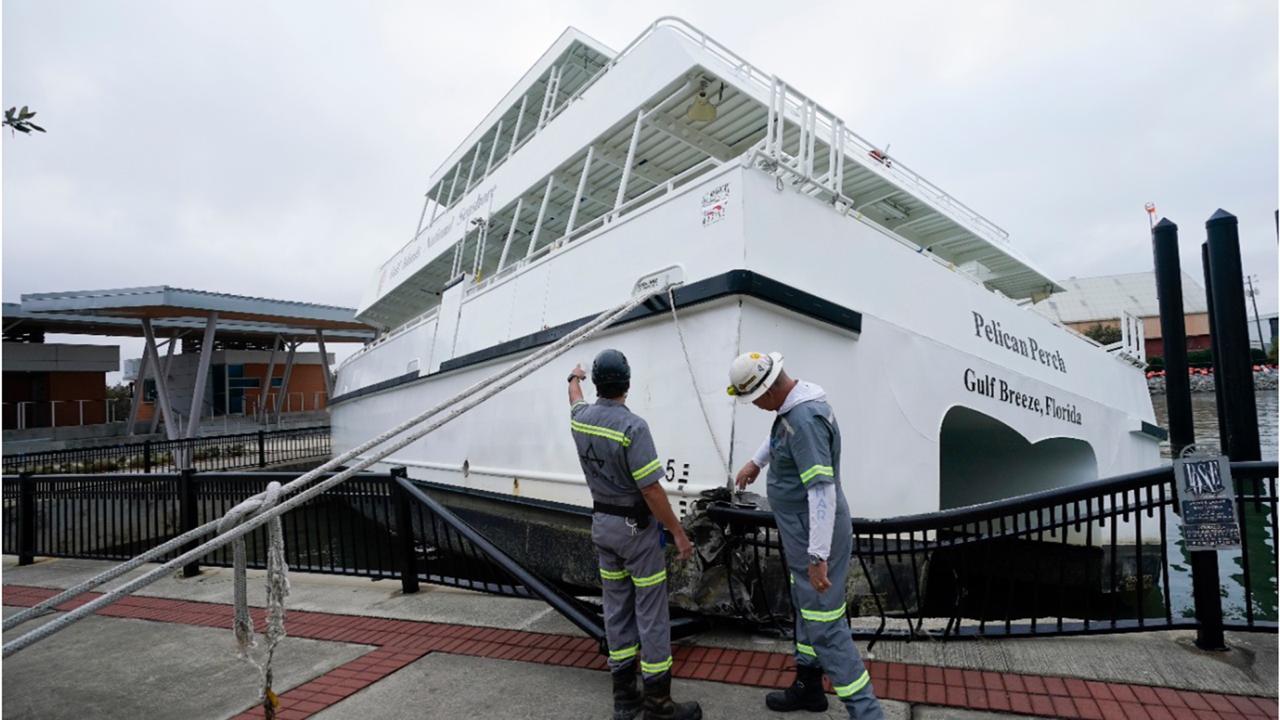 Workers look over a damaged ferry , Thursday, September 17, 2020, in Pensacola, Florida. Rivers swollen by Hurricane Sally's rains threatened more misery for parts of the Florida Panhandle and south Alabama on Thursday, as the storm's remnants continued to dump heavy rains inland that spread the threat of flooding to Georgia and the Carolinas.(AP Photo/Gerald Herbert)

Rescuers on the Gulf Coast used high-water vehicles Thursday to reach people cut off by floodwaters in the aftermath of Hurricane Sally, even as the second round of flooding took shape along rivers and creeks swollen by the storm’s heavy rains.

Across southern Alabama and the Florida Panhandle, homeowners and businesses began cleaning up, and officials inspected bridges and highways for safety, a day after Sally rolled through with 105 mph (165 kph) winds, a surge of seawater and one to 2 1/2 feet (0.3 to 0.8 metres) of rain in many places before it began to break up.

Sally's remnants were over South Carolina on Thursday afternoon and were expected to move into the Atlantic within 24 hours. A rainmaker to the end, what was left of the storm was forecast to dump as much as eight inches (20 centimetres) in isolated areas in the Carolinas and southern Virginia, prompting warnings of widespread flash flooding and “moderate” river flooding. As much as eight inches of rain had fallen in central Georgia by midday.

In hard-hit Pensacola and surrounding Escambia County, where Sally’s floodwaters had coursed through downtown streets and lapped at car door handles on Wednesday before receding, authorities went door-to-door to check on residents and warn them they were not out of danger.

“Please, please, we’re not out of the woods even if we’ve got beautiful skies today,” said Escambia County emergency manager Eric Gilmore.

Laura Coale, communications director for Escambia County, Florida, said rescue crews were taking a second pass through flooded areas Thursday afternoon to see if anyone who declined to leave earlier would like to evacuate. Officials’ biggest concern was keeping people off the roads so power trucks can work and people can clean debris safely.

Florida Gov. Ron DeSantis urged Panhandle residents not to let their guard down even though the hurricane had passed. “You’re going to see the rivers continue to rise,” DeSantis said after an aerial tour of the Panhandle.

Most rivers fed by the storm were cresting in Alabama and the Panhandle on Thursday, although the Shoal, in Florida was still rising, expected to crest by late Thursday or Friday, said Steve Miller of the National Weather Service in Mobile, Alabama. Near Crestview, Florida, portions of Interstate 10 and US Highway 90 — the two main roadways running east to west through the Panhandle — were closed.

Crews carried out at least 400 rescues in Escambia County, Florida, by such means as high-water vehicles, boats and water scooters, authorities said.

Rescuers focused their efforts Thursday on Innerarity Point, a narrow strip of land close to Pensacola that is home to waterfront homes and businesses. Floodwaters covered the only road out, though authorities said no one was in immediate danger.

Richard Wittig and his family were among scores of people hemmed in by floodwaters on an island at the tip of the point. Two generators were powering his house, fueled by 30 gallons (114 litres) of gasoline Wittig bought ahead of the storm.

“If I didn’t have a working generator, we’d be dead. Nobody can get to us,” said the 77-year-old Wittig, who said he and his son rely on oxygen machines to keep them alive.

The Florida National Guard said it had deployed about 500 soldiers and airmen to help local authorities evacuate 113 people, though it did not say when and where the rescues took place.

About 35 miles (56 kilometres) inland, a swollen Murder Creek cut off access between the Alabama towns of Brewton and East Brewton, inundating a grocery store, a tobacco shop, a park and more. Residents behind a police roadblock gazed at the neighbouring city across fast-moving water covering a bridge.

“Mama, look. Water’s all the way up in here!” 11-year-old Rachana Matthews said.

East Brewton resident Brenda Davenport said it took only four hours for the water to rise. “It could take two days for it to go down,” she said.

Picking up soggy debris in her yard in Orange Beach, Alabama, Janice Sullivan swore she would never ride out a hurricane again. She and her daughter huddled in a second-floor bathroom as Sally blew ashore. The winds grew so violent Sullivan feared the roof would fly off.

A few people cleaned up in Bristol Park, a creekside neighbourhood where as much as four feet (1.2 meters) of water-filled brick homes north of Pensacola.

Susan Cutts’ parents fled rising water inside their home into the garage, where they desperately called for help on a dying cellphone until aid arrived.

“They were on top of their car when they got to them,” Cutts said.

At least one death, in Alabama, was blamed on the hurricane. More than 427,000 homes and businesses in Florida, Alabama and Georgia were without power as of Thursday afternoon, down from more than a half-million a day earlier.

A section of the main bridge between Pensacola and Pensacola Beach collapsed after it was hit by a barge that broke loose during the storm.

At a downtown marina, at least 30 sailboats, fishing boats and other vessels were found clumped together in a mass of fibreglass hulls and broken docks. Some boats rested atop sunken ones. The hurricane also drove two large ferry boats into a concrete seawall and left them grounded. The boats had been purchased with BP oil spill money.

Also on Thursday, the National Hurricane Centre said a new tropical depression formed in the southwestern Gulf of Mexico. Forecasters said the depression could become a tropical storm as it moves slowly over the western Gulf during the next few days. Meanwhile, Hurricane Teddy strengthened to an immensely powerful Category Four storm in the Atlantic on Thursday. The storm currently poses no threat to land.