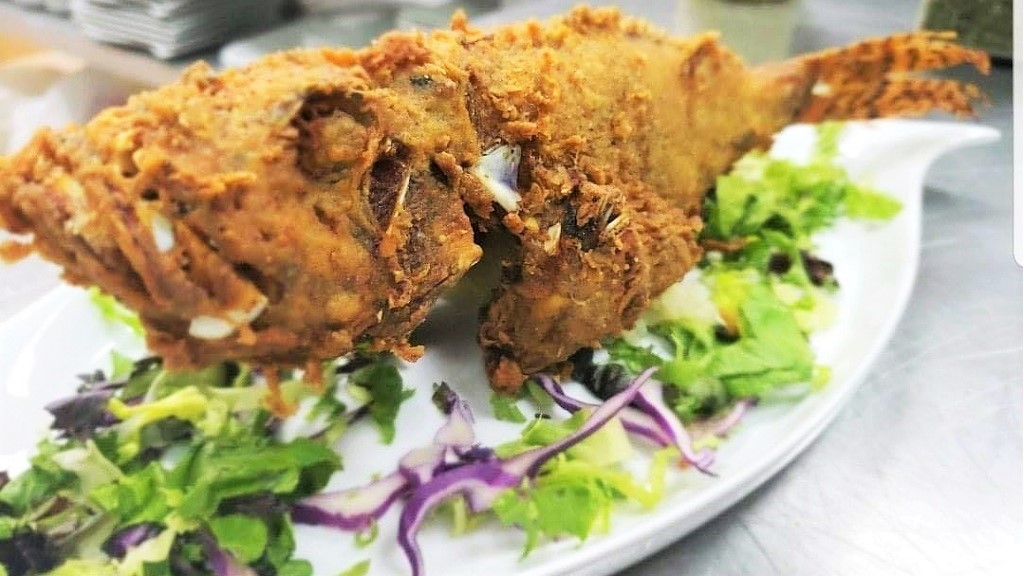 Photo: Sails Restaurant and Bar serves fresh lionfish as part of its lunch and dinner menu. Lionfish are an invasive species which cause severe damage to coral reefs and efforts are being made to keep their numbers in check. Photo courtesy Sails Restaurant and Pub/Facebook.

A Chaguaramas restaurant’s lionfish menu is helping to save the environment while serving delicious Lenten meals.

Sails Restaurant and Bar is one of the few restaurants in Trinidad to offer lionfish, an invasive fish which has decimated reef populations since it was introduced to the Caribbean in the early 1990s.

Chef and owner Attala Maharaj said the restaurant has offered lionfish dishes during their Restaurant Week promotions over the past two years, to raise awareness about this invasive fish and to reduce its numbers.

For those hesitant about the taste, Maharaj assures it’s delicious.

“It’s actually a spectacular tasting fish, as beautiful and as regal looking as it is on the outside, the flesh is the same.  It’s sort of a cross between snapper and grouper, with a firm texture and a buttery taste.”

Maharaj also put any fears to rest regarding the lionfish’s venomous spines, which are removed prior to cooking, leaving it perfectly safe to eat.

She said: “Many people are put off or scared simply because of how it looks and also there is a lot of information about it being poisonous. It’s actually venomous, meaning the toxin has to be delivered directly to your bloodstream via the spines."

"However those are removed before the cooking process, so eating the flesh is totally safe.  We are also trained to remove the spines so there are no worries there.” 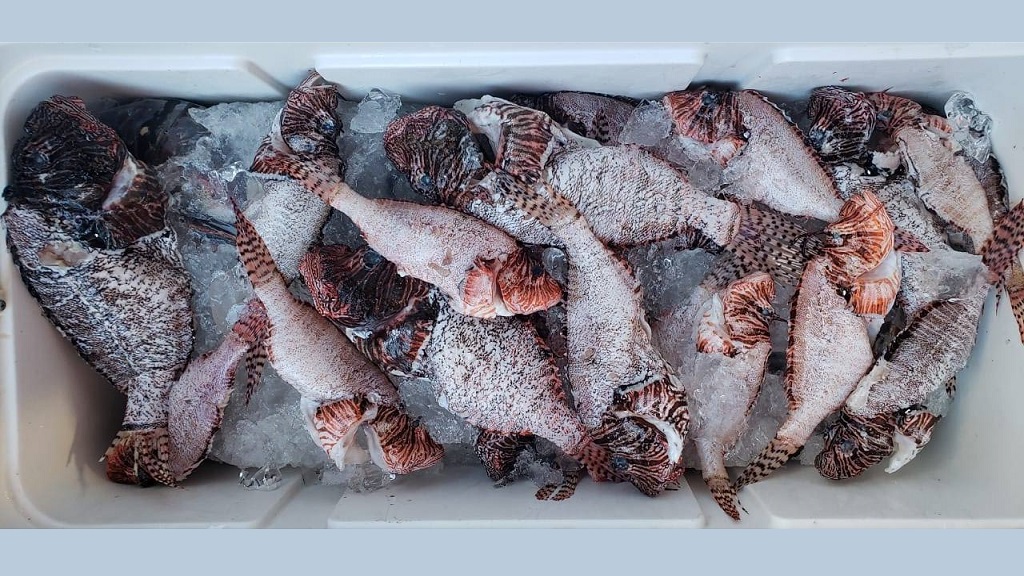 The restaurant currently offers lionfish both for lunch or dinner, either grilled or fried, served as a whole fish.

Maharaj said they are happy to offer this dish knowing that it helps to save the environment and reduce lionfish numbers.

She said: “We focus a lot on sustainable fishing and practices and would really like to encourage folks to try the lionfish as an option.”

“We need to control the population as it is out of control in certain areas and has negative impacts on the native life and reef systems. And it’s a perfectly good fish to eat so it's a win-win.”

Maharaj said lionfish is also served at their sister restaurant The Salty Dog at the Trinidad & Tobago Yacht Club in Glencoe.

As for eating lionfish, Maharaj said like all food, make sure it’s purchased from a trusted supplier. The restaurant currently sources their fish from the Lion’s Den Seafood.

“We would recommend getting Lionfish from trusted sources (as with all fish) to ensure it’s fresh. We encourage people to try it at home as well - it’s a great fish for local dishes so it can be curried, stewed and steamed,” she said.

Lionfish, native to the South Pacific and Indian Oceans, is an invasive species in US Southeast and Caribbean coastal waters and is a voracious eater – its stomach can expand to 30 times its size.

However some restaurants have begun offering lionfish (which is perfectly fine to eat once the spines are removed) in an effort to drive conservation measures. 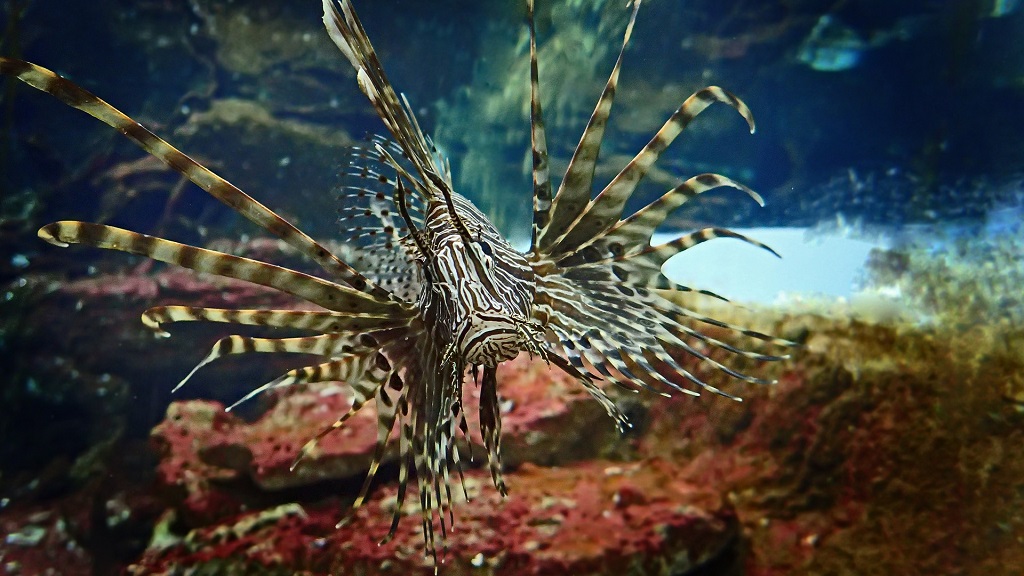 Image by Schwoaze from Pixabay

Five things to know about lionfish

1. They eat (almost) everything

Lionfish are known to eat almost everything, including parrotfish and other species critical for the health of coral reefs and the fishing industry.

Lionfish have been observed consuming 20 small fish in a 30-minute period - their stomachs can expand to up to 30 times their normal size.

A single small lionfish may reduce the number of juvenile native fish on any given reef by approximately 79 percent in just 5 weeks.

2. They have few predators in the Caribbean

Because they’re not native to the Caribbean, lionfish have few predators. Predators known to hunt lionfish in their native habitat include cornetfish, grouper, large eels, bobbit worms, frog fish, other scorpionfish, sharks and some others.

A female lionfish can release between 10,000 and 30,000 unfertilized eggs every four days year ‘round, that’s approximately 2 million eggs per year, in South Florida and warmer Caribbean waters.

It has been reported that the egg sac contains a chemical deterrent that discourages other fish from eating the eggs.

According to the US National Oceanic Atmosphere Administration (NOAA), lionfish has now become established in Bermuda, the Bahamas, Columbia, Cuba, the Dominican Republic, Jamaica, Puerto Rico, Turks and Caicos, and the Cayman Islands. There are also reported sightings in Belize, Haiti, US Virgin Islands, Mexico, and Aruba, Curacao, and Bonaire.

According to Sailors for the Sea, lionfish live in the natural crevices of coral reefs. They don’t school and aren’t easily attracted by bait. The only way to catch them is through spearfishing, one at a time, reef by reef.

Gathering enough to sell to a restaurant or market can be a challenge. However, as the interest in eating them grows, fisherman are able to dedicate more time to catching them.

For more information on Sails Restaurant and Pub, visit them on Facebook at https://www.facebook.com/Sailstrinidad/