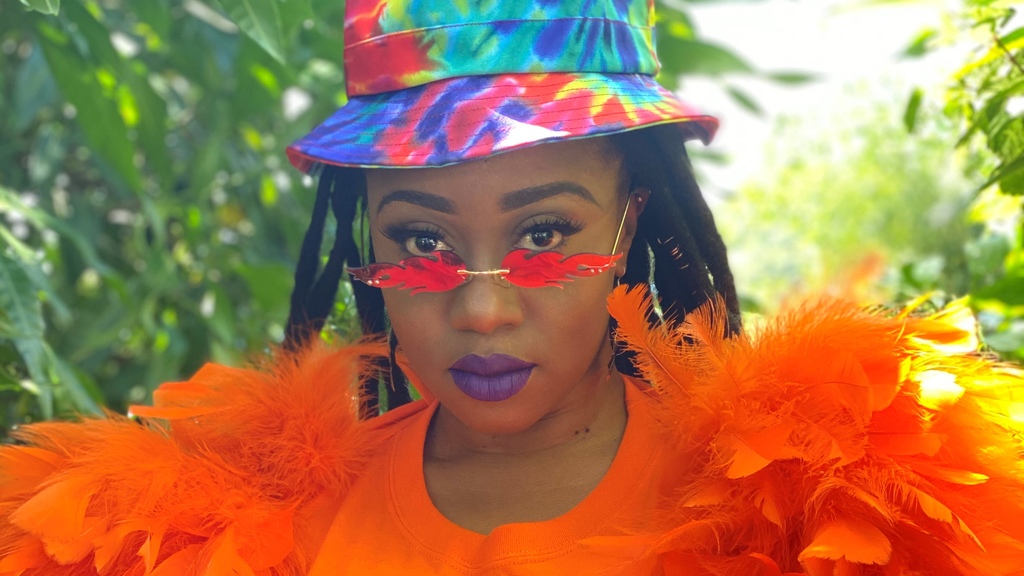 Ris Anne Martin, founder of Brown Cotton Caribbean, has been stamping her aesthetic all over pop culture

If Ris Anne’s career was made into a play, it would be segmented into four main acts: The Designer, The Stylist, The Costume Designer and The Mentor.

In each act, she has taken the reins of her career and guided it to heights that have not only helped to build a thriving business but feed her soul. 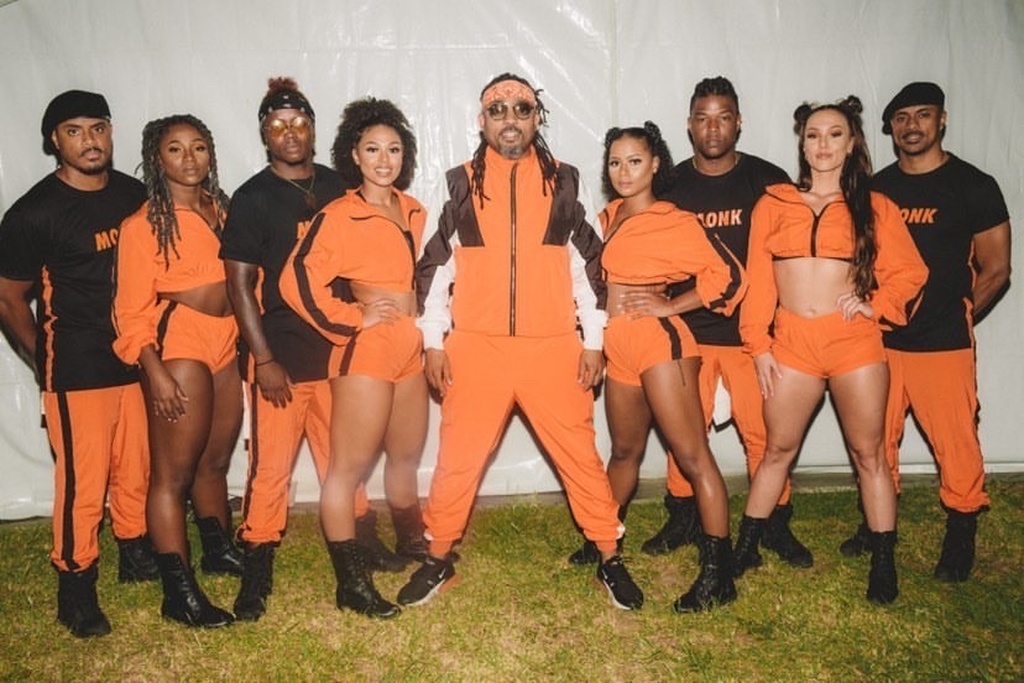 For Carnival 2020, Ris Anne Martin was given the job to outfit soca star Machel Montano and his dancers

Left on the sidelines because she couldn’t make the notes in a musical play she was in which she was cast in Jamaica where she was studying, Martin was given the gig working with the wardrobe supervisor. When the woman quit the job, Martin took over and fell in love with it.

Her first client was soca artiste Kerwin Dubois in 2013.

“I met him at One Woodbrook Place. I had no money to meet him that day so I walked from Ana Street to One Woodbrook Place. He wanted personal styling so I had to go in his closet and put things together. He asked if I designed and I watched him with a blank face. I knew I had it in me but I felt I needed to knighted, validated, go to school, or something. I tried to design a thing and I did a mini collection and gave him the male pieces. He was the first person to believe in me that way,” she recalled.

In 2014, Martin launched her first major collection, Iris, at the Tobago fashion Week. Named after her then-ailing mother, the bold, fun collection firmly pushed Martin to invest in doing a full collection and she has been doing one every year since.

Through her design label Brown Cotton, Martin has been stamping her distinctly Caribbean aesthetic all over pop culture. Her partner Leah DeGannes, who works as the Production Manager, has played an integral part in helping the business to develop.

Today, Martin has become the go-to stylist and designer for artistes seeking an edgy, sensual, and bold Caribbean vibe.

Her designs have been seen in Nailah Blackman’s in videos for ‘Oh Lawd Oye’, ‘Iron love’ and ‘Boujee’, and Patrice Roberts in the video ‘I Like it Hot’. 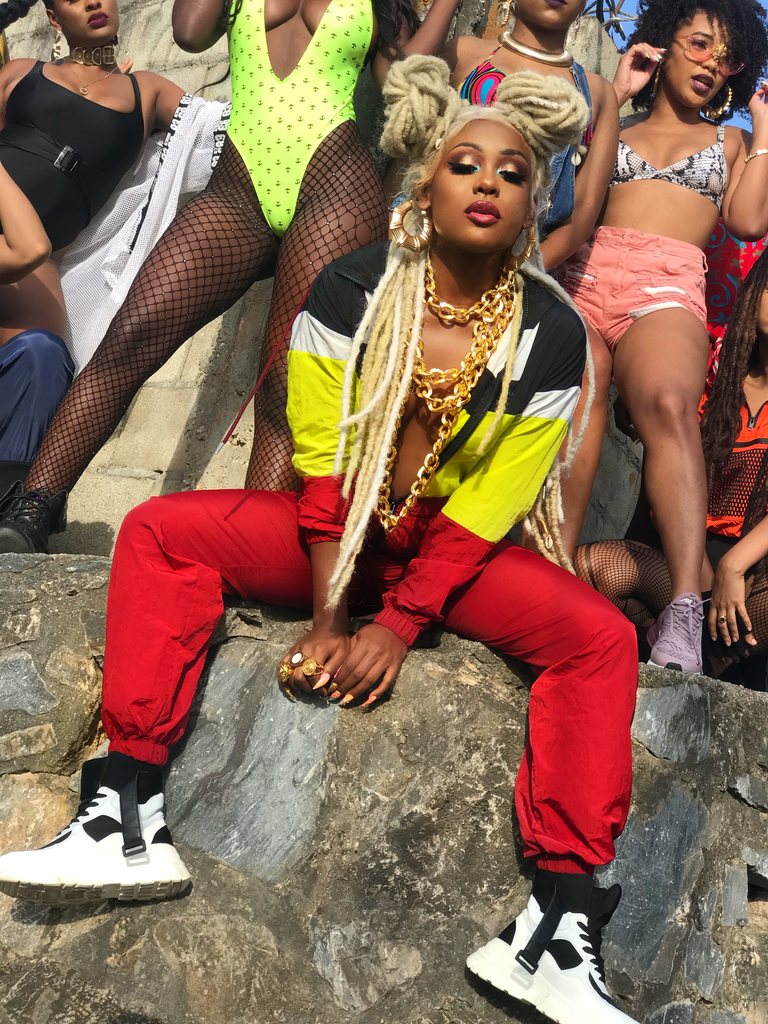 Nailah Blackman styled by Ris Ann for her Boujee video

For Martin, styling is an art which is why she prefers to work with artistes on their music videos or ads.

“Music videos are a great opportunity to showcase our design and products could elevate them to another level, you could put them in anything, Performance styling is more of a hustle and what we are doing is an art. When it’s a video, we take our time and craft a look and everything is intentional,” said Martin who has done styling for White Oak, KFC, Digicel, and Caribbean Airlines’ ads.

For Carnival 2020, Martin’s talents as a stylist was taken a notch higher when she was asked to style soca king Machel Montano.

“Working with him is incredible, his team has good energy. We got a call from Che, his manager, who asked if we could work for Machel Monday last year, so we said hells to the yes. It was a week before and they wanted wardrobe management. He had like 12 changes that night. We did that and it was a success. We’ve been in the entertainment styling industry for a while now but in terms of working with the best in the industry, I felt like that is where we were going. It felt natural,” said Martin.

“They called us back this year to do styling and we designed outfits and styles. We were super booked, we were very honest and upfront about what we could and couldn’t do and they were fine. Their whole look this year was very urban, they were into sweaters and the jumpsuit vibes which previously wasn’t my cup of tea but now I am working on an urban collection. Some of the outfits were our design and he loved it!”

Asked how she approaches her work as a stylist, Martin said she listens to her clients, looks at their sense of style and try to achieve a more elevated version of who they are.

“I think a successful stylist is one who could add life and impact to somebody making them look like themselves not like me. I want for everyone, fabulousness. If left up to me everyone would be in a leopard crop top,” she said with a laugh. 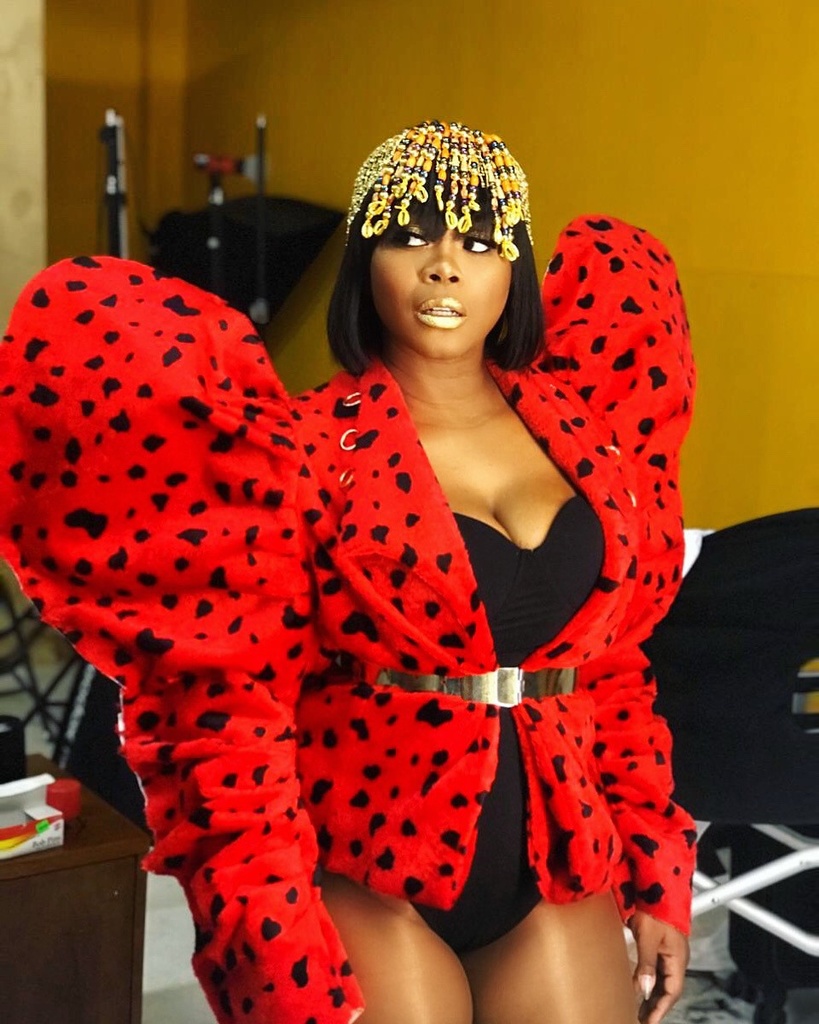 In 2016, Martin went to London to do a course in fashion design. That was the year The Lost Tribe made its debut in Trinidad’s Carnival and Martin was blown away.

“I nearly dead. I said if I have to do this ever, I have to do it with Lost Tribe.  I wasn’t interested in costumes, part of it was fear that I wouldn’t do well but also because I wasn’t connecting to it. But as a designer and creative, I felt I had to connect with it and I did through the styling on Nailah and Patrice. In January 2017 I said Ris Anne you need to be boldfaced and if you get a no is nothing,” she recalled.

She was introduced to the band’s Director Valmiki Maharaj and he told her to draw something and come back to him.

“I went home and I did something, it was rushed, it wasn’t my best design work. I pushed for it and he pushed for me too and we came to a consensus because Lost Tribe is a collaborative vibe, is not competition.”

Martin has been designing for the band for the last three years. Her costumes, such as this year’s Anansi,  have been among the most popular and visually stunning.

She has even expanded her costume design skills outside of T&T, designing for bands in St Lucia and Grenada and four sections for St Croix’ Carnival this past January, which was also her first production job.

Thank you all so much for all the love!❤️🙏🏾 Nothing is ever the same without having my mother here with me! She would have been right next to me, even more beautiful than ever! I miss her! #emotionalpost #yallknewitwascoming #iloveyouguys #cominghardernextyear #losttribecarnival2020 #irisdawta #backtowork

Martin started working with the youth in 2015, going to primary schools, talking to Principals and getting their permission to talk to the students.

In 2017, FCB asked her to create this program and to be the main speaker at their Girls First Festival.

“The first time I did it was Tobago in 2017 and 280 girls showed up. One Sunday a month we did a different school and we talked about issues affecting girls and we’d finish with a fashion show,” said Martin.

Last year, Martin was given the reins to design the theme and layout for the event.

Martin, who is one of the 40 Under 40 ambassadors with the Ministry of Sports, said she views mentorship as her immortality project, a way to impact lives for the future.

“Mentorship feeds my soul. That enables me to do things in a much better way. After I talk to those girls everything is clearer in my life,” said Martin.

A mentorship tour was also planned in conjunction with the Young Leaders of the Americas program into which she was accepted but that has been postponed to early 2021. 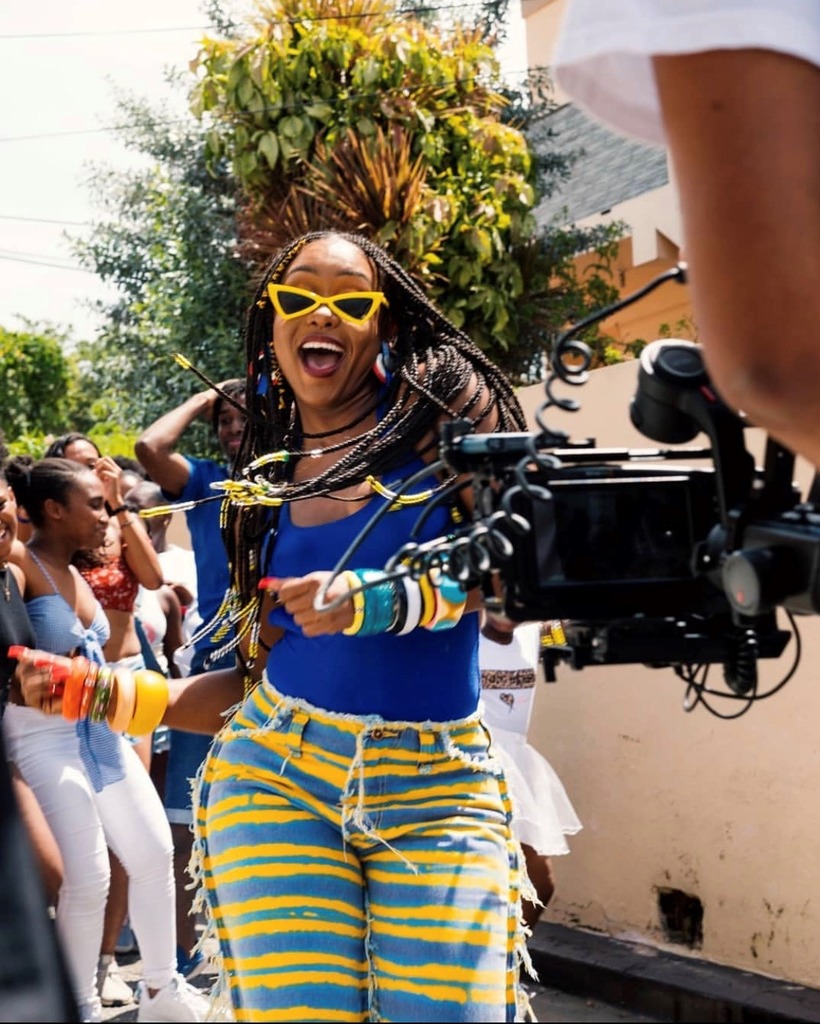 “The pandemic has changed so much for me and my plans. However, it’s given me a rare opportunity to evolve, do research, and discover so much about myself and my purpose. It reminded me of my true wealth aka my siblings, father, and partner,” says Martin of how the COVID-19 has impacted her business and life.

“Work-wise it has changed the way we operate. Our work week now consists of online “Fashion Therapy” sessions/consultations with clients that focus on the relationship between their personal style and their journey to success. This has been a very popular service and our social media marketing hasn’t even officially rolled out yet.”

She revealed that her Creative Youth Mentorship Caribbean wide Tour that was carded for September is now an online initiative and she is currently seeking corporate partners and collaborators to get this off the ground.

She is also working on a pilot for an online fashion series that showcases the work, challenges, and triumphs of Caribbean creatives.

All other images: Brown Cotton Caribbean