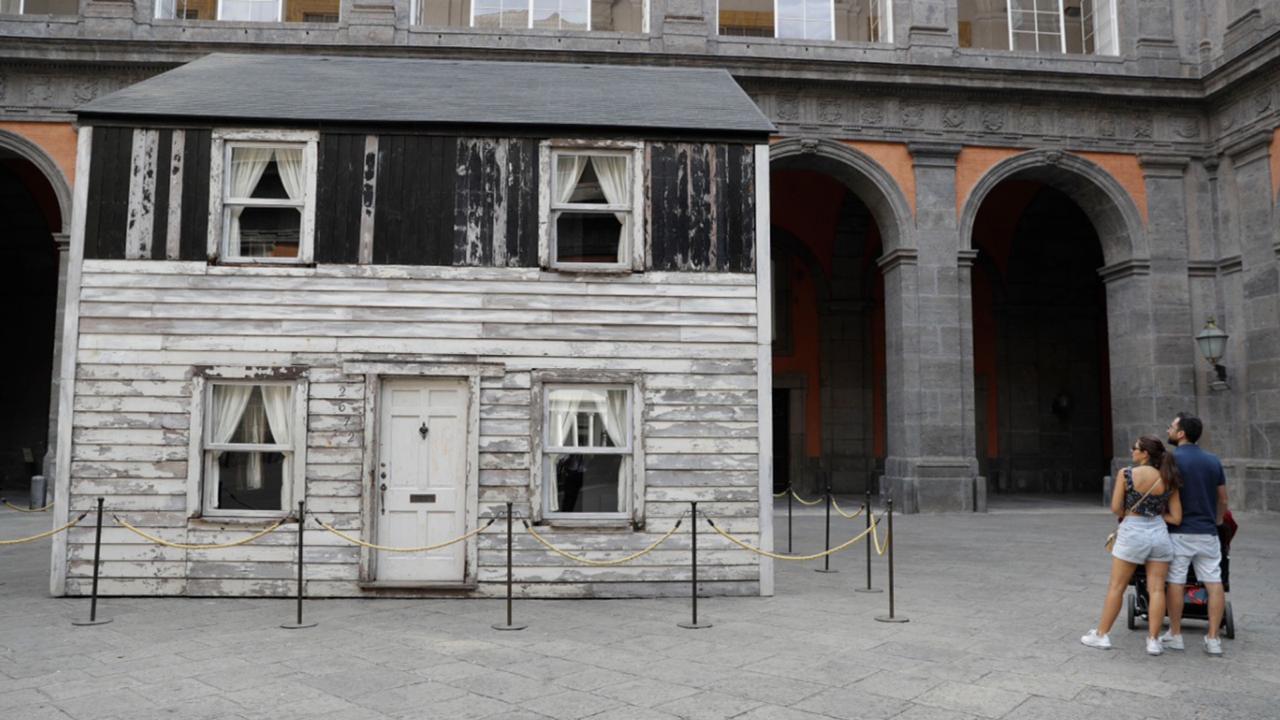 The house of US civil rights campaigner Rosa Parks, rebuilt by artist Ryan Mendoza, is on display in the courtyard of an 18th century Royal Palace, in Naples, Italy, Tuesday, September 15, 2020. It’s the latest stop for the house in a years-long saga that began when Parks’ niece saved the tiny two-story home from demolition in Detroit after the 2008 financial crisis. (AP Photo/Gregorio Borgia)

The run-down, paint-chipped Detroit house where US civil rights icon Rosa Parks took refuge after her historic bus boycott is going on display in Italy in a setting that couldn’t be more incongruous: the imposing central courtyard of the Royal Palace in Naples.

It’s the latest stop for the house in a years-long saga that began when Parks’ niece saved the tiny two-story home from demolition in Detroit after the 2008 financial crisis. She donated it to an American artist who rebuilt it for public display in Germany, and now Italy, after failing to find a permanent resting place for it in the US.

As racial tensions seethe across the Atlantic, the exhibition of the home starting Tuesday has taken on fresh relevance. The display is being accompanied by a repeating soundtrack entitled “8:46” and lasting that long. It's the time it took for a Black man, George Floyd, to be killed by white police officers in a May slaying that has fueled the Black Lives Matter movement and protests around the nation in reckoning with America’s history of slavery and racial injustice.

Artist Ryan Mendoza has been campaigning for more than five years to draw attention to the historic value of the home, where Parks lived for a short time after her 1955 defining act of defiance: refusing to give up her seat on a bus to a white passenger in Montgomery, Alabama.

The yearlong refusal of African Americans to ride city buses that followed is regarded as the first major US demonstration against segregation.

In an interview ahead of the opening, Mendoza said he hoped the grandeur of the Naples debut of “Almost Home" would draw attention to Parks’ legacy and help America “remember a house it didn’t know it had forgotten.”

Parks lived in the tiny house in Detroit with her brother and his family as she struggled to make a new life for herself in the northern US after receiving death threats following the bus protest. The family says Parks, who died in 2005, lived there with 17 other relatives.

The house was abandoned and slated for demolition after the financial crisis in 2008 and Detroit’s dramatic decline, but Parks’ niece, Rhea McCauley, bought it from the city for $500 and donated it to Mendoza. After unsuccessful efforts to persuade the city to help save the building, Mendoza in 2016 dismantled it and moved it to the German capital, rebuilding it on the lot of his studio for public display.

In 2018, Brown University announced it would feature the house as part of a planned exhibition on the civil rights movement organised by its Center for Slavery and Justice. But it backed out at the last minute, citing a legal dispute with the family.

Earlier this year, Mendoza approached the Naples-based Morra Greco Foundation, where he had worked for a year in the 1990s. The Foundation agreed to help organise the exhibit with the backing of the Italian culture ministry and Campania regional government.

For Mendoza, the house epitomises the experience of many African Americans who migrated north in the first half of the last century, only to face redlining and other discrimination that has affected generations of black Americans.

“This house, in a word, is a way for people to understand why people in America are so enraged,” he said.

He takes particular satisfaction that the house, which is “so fragile that you can almost blow it over,” is being exhibited in the central courtyard of a royal palace, where it certainly would have never found welcome by the kings of the House of Bourbon.

But now, “instead of being rejected by the walls of the royal palace, it’s embraced and protected by these walls,” he said. “Potentially thanks to the showing of the house in this way, America will allow the house to have a home.”

Grenadian activist: Prejudices and racism exists in the Caribbean too