Sinanan: Water level in photo of Imbert was not that high 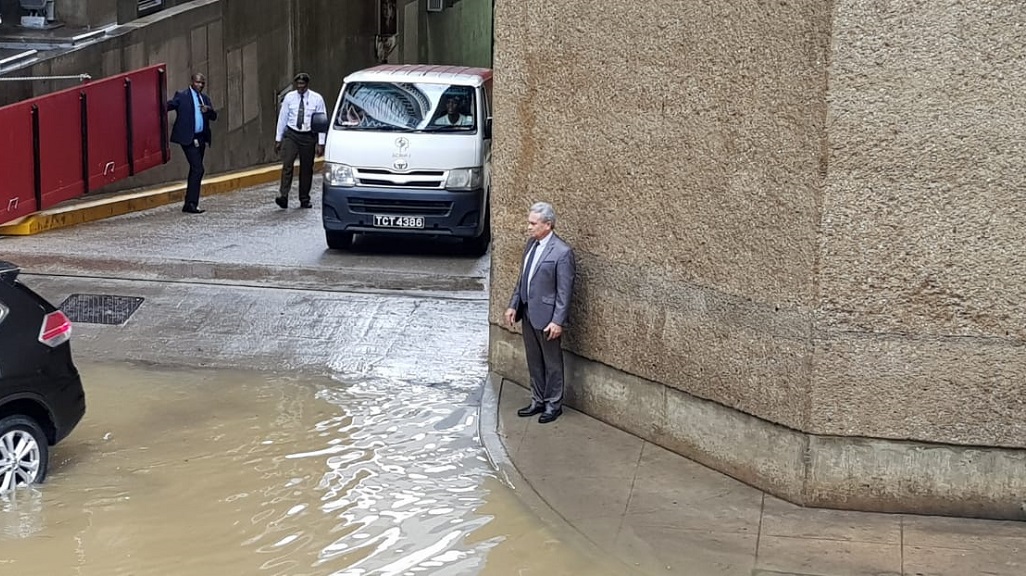 Minister of Works and Transport Rohan Sinanan said a viral photo circulating of Finance Minister Colm Imbert sheltering from flash flooding was being made out to seem worse than it was.

The photo, which went viral on Thursday evening after torrential showers led yet again to flash flooding in the capital, showed Imbert standing on the pavement outside of the Eric Williams Financial Complex, looking out over a flooded roadway.

Sinan said to Loop News on Friday however that with the volume of water which was dumped on the capital in such a short space of time, flash flooding was to be expected.

“If you look at the picture, you would see the water was at most just four inches high, it did no even reach to the height where it would have gone into the basement.

The height of the sidewalk was six inches from the road which means the water didn’t even reach that height. So it was just four inches of water which ran off very quickly,” he said.

Sinanan in situations of heavy rainfall such as that, flash flooding is to be expected.

“With that kind of weather you would get flash flooding, that happens all over the world. The water comes down in a huge quantity and within minutes it goes back to normal.”

“That was flash flooding coming out of the drains…within minutes the water would have receded. That was a significant downpour, so flash flooding is to be expected.”

“The water did recede within minutes so that means the drains were clean and the river did not topple its banks,” he said.

Sinanan said in addition the focus is being made on preventing flooding at South Quay.

“What we’re trying to do is ensure that we have a quick runoff in situations like these…we are in the middle of the rainy season. South Quay did not have significant flooding this time, and there were no other reports of serious damage which is the main concern.

“We’re concentrating on South Quay and yesterday we had no problem there. Obviously, when you have flash flooding like that, water will come up but it’s just surface water, the water is not breaching the banks of the river,” he said.

Sinanan said the newly installed water pumps near Sea Lots are having a positive effect.

“What we are doing right now is experimenting with the pumps which seem to be working with the underground drains and that’s why South Quay didn’t flood,” he said.

Citizens heading east also complained of traffic as a result of flash flooding, which hampered mobility for many in parts of north and north-east Trinidad, including Santa Cruz, Maraval, Port of Spain and St Augustine, among others.

Watch: Parts of Trinidad under water after heavy rains