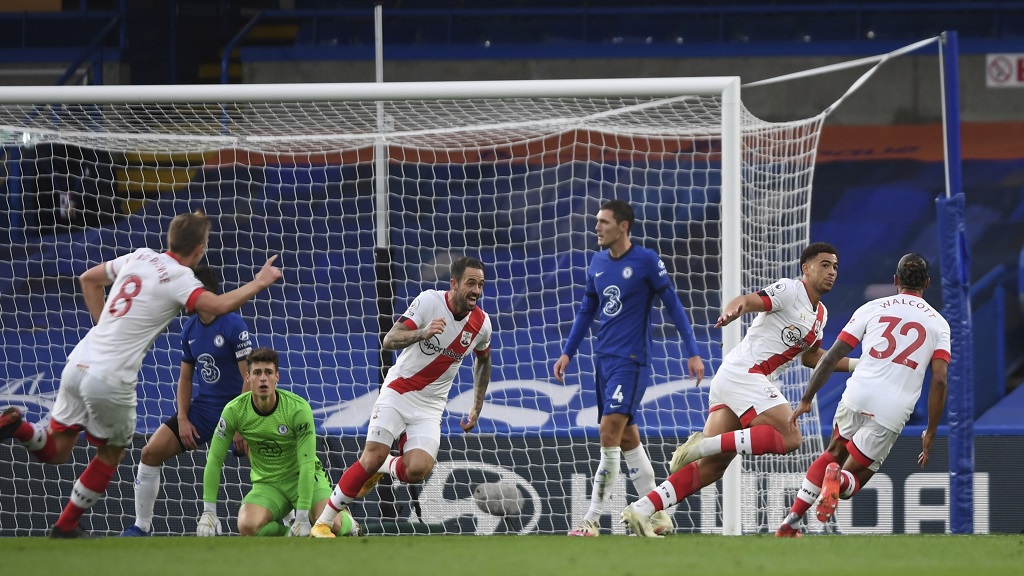 Southampton scored a stoppage-time equaliser to rescue a 3-3 draw at Chelsea in the Premier League on Saturday, highlighting how the home team's defensive vulnerability remains despite its offseason spending spree.

Jannik Vestergaard glanced in a speculative shot from deadline-day signing Theo Walcott in the second minute of added-on time as Southampton rallied for a second time, having fallen 2-0 behind to Timo Werner's first goals in the league.

Chelsea, which have already drawn two matches 3-3, missed the experience of one of their new recruits — center back Thiago Silva, who was missing as he recovered from international duty with Brazil — and also could have done with recent signing Edouard Mendy in the team.

With Mendy injured on international duty with Senegal, error-prone goalkeeper Kepa Arrizabalaga filled in and made a bad mistake which allowed Southampton to make it 2-2.

Vindicating his nickname of “Turbo Timo," Werner got in behind Southampton's defensive high line two times in the first half before producing composed finishes to open his account in the league five games into the campaign following his offseason move from Leipzig.

He dummied the ball and span his marker to latch onto Ben Chilwell's pass before cutting in and scoring the opener in the 15th. Then he ran onto Jorginho's long pass forward, chipped the ball over advancing goalkeeper Alex McCarthy, and nodded into an empty net in the 28th.

Danny Ings pulled a goal back for Southampton just before halftime, and Che Adams took advantage of dreadful defending by Chelsea to equalise in the 57th minute. First, Kurt Zouma's backpass was underhit, then Kepa made matters worse by completely missing the ball under pressure from Adams and then hooking it back into danger in the six-yard box after the ball came back off the post.

Kai Havertz reclaimed the lead for Chelsea within three minutes by tapping into an unguarded net after Werner was played in down the right — again exploiting Southampton's high line — and crossed low for his Germany teammate to finish.

Vestergaard struck late, though, to deny Chelsea a third win so far.

It was a first look at Chelsea's new attack — Werner started as the central striker, Havertz was deployed just behind him, while wingers Christian Pulisic and Hakim Ziyech made appearances after injuries — and there will be justifiable excitement among the club's fans following its offseason spending spree of approaching $300 million.

Chelsea, after all, have scored 13 goals in five league games. And Werner is now up and running, although he had already scored in the English League Cup this season.

Still, the defense remains a big issue and looks to be the biggest barrier to a concerted title challenge.