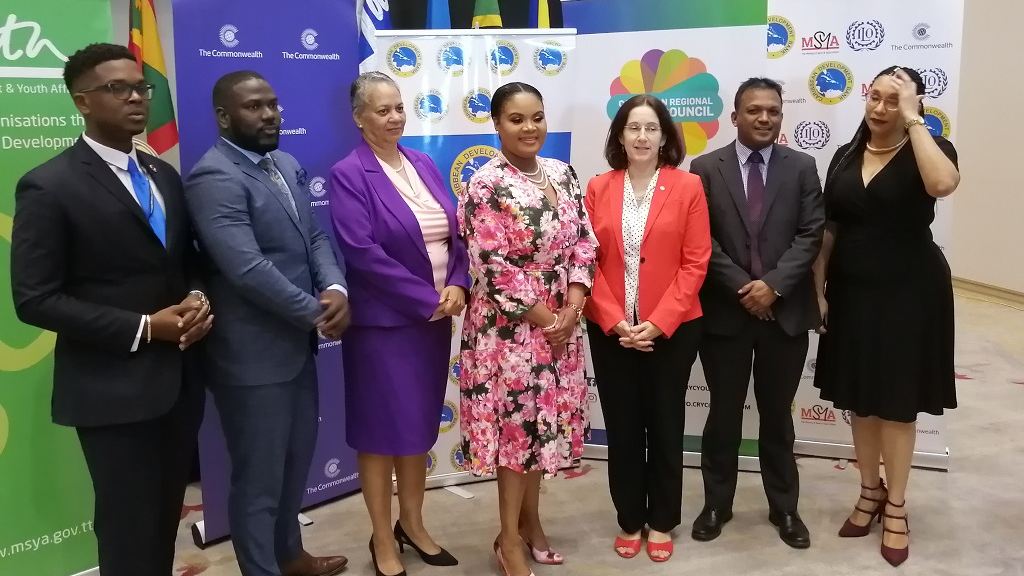 Minister of Sport and Youth Affairs, Shamfa Cudjoe, with other official speakers

Young people are being urged to take stock of the music they listen to, especially the songs that fuel crime.

Minister of Sport and Youth Affairs Shamfa Cudjoe addressed the issue as she spoke to participants at the opening ceremony of the 6th Caribbean Youth Leaders’ Summit which was held at the Hyatt hotel on Tuesday 21, January 2020.

The Minister said while complaints are made constantly about crime, young people should be wary of the music they support.

“We want to talk about crime and the government needs to do something about crime, but you’re out there supporting and promoting the music that fuels crime,” said Minister Cudjoe.

She said while regional governments will do what they can to assist with the growing issue of youth unemployment, she says young people must also take responsibility for themselves as the Minister recalled an incident about a young woman dressed inappropriately, who showed up at her office looking for a job.

“You have to check yourself; you can’t have party clothes and don’t have work clothes. You need to go to work to buy the ticket to go to the party,” said Minister Cudjoe.

The Sport and Youth Affairs Minister said while youth speakers will urge their peers over the coming days to challenge their governments over the need for jobs, they, in turn, should also challenge themselves.

Minister Cudjoe said: “This right to jobs and decent work comes with responsibilities. You want to stop renting and own a home, but you don’t want to save.

You have the ability to face the bank to get a credit card, but the girls want to buy bundles and the boys want to buy a car and when it's time for you to get a home it’s difficult.

These issues that we challenge our government about are also youth issues because you can’t want to talk about access to jobs but when it's time to talk about labour issues and productivity you are silent.”

The youth summit which was organised by the Caribbean Regional Youth Council is being held in T&T until January 23, 2020.