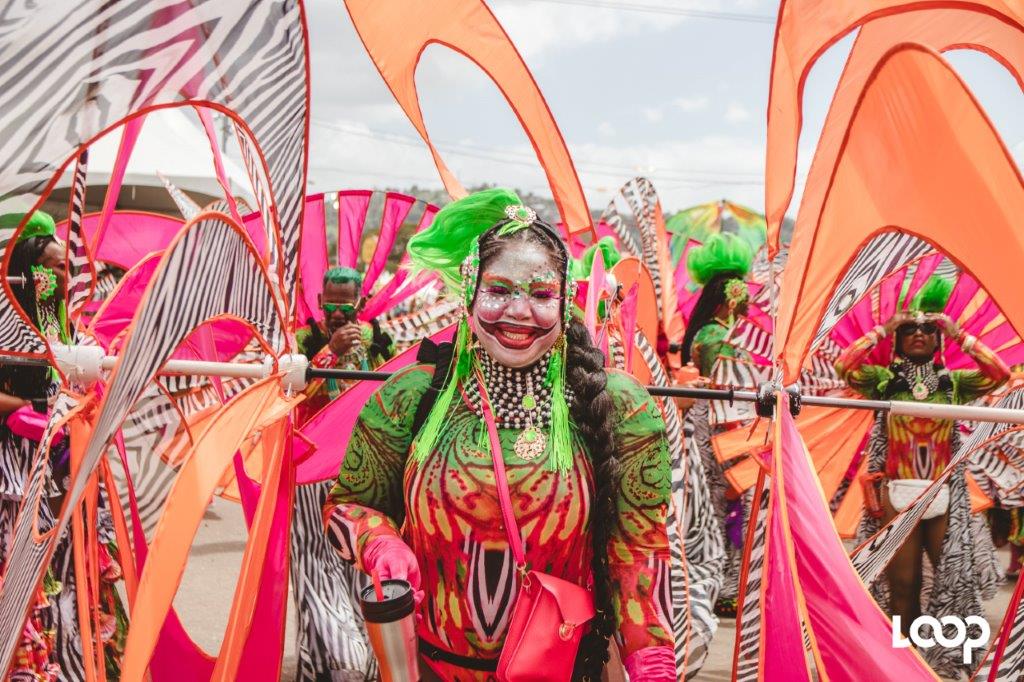 FILE photo: Masquerader from the 2020 presentation from K2K. Carnival may not be held next year but stakeholders look forward to a virtual celebration of T&T's culture.

While there may not be a Carnival on the streets of Trinidad and Tobago in 2021, there might be Carnival in the virtual space.

While not divulging details, Minister of Tourism, Arts and Culture Randall Mitchell told Loop that there is a consideration for an alternate way to celebrate Carnival and showcase different aspects of the world-famous festival.

Mitchell spoke briefly to Loop following Prime Minister Keith Rowley’s announcement this morning that there will be no Carnival next year.

“I can put everybody on notice that unless there is some dramatic wind that will blow across us where, by Christmas, the pandemic would have been a thing of the past, Carnival in Trinidad and Tobago in 2021 is not on,” the Prime Minister said.

However, he did not rule out an alternative form of the annual event and as such, the festival's major stakeholders are preparing to present their products in a virtual format.

Lutalo Masimba, President of the Trinbago Unified Calypsonians Organisation (TUCO), said they are prepared to present calypso virtually and have been planning for such.

He said although they have not settled on a definitive format, they have been making plans to present the calypso a virtual product beyond just the competitions.

“It is important that we keep active and we make sure our music could reach the world,” he said.

Beverley Ramsey-Moore, President of Pan Trinbago said while there will be no virtual panorama in 2021, there is an opportunity to use the virtual space to educate the world about the steelpan and its history.

She said Pan Trinbago had informed the National Carnival Commission (NCC) that they would support the postponement of Carnival because they do not want to expose their players to any risk of contracting the virus.

“There might be a virtual pan showcase but anything to do with crowd, cause a band in itself is a crowd due to the numbers, is extremely difficult. We are not in support of that,” she said.

She said their proposal to the NCC did, however, include putting together content to market, promote and educate the world about the national instrument.

Roslyn Gabriel, President of the Trinidad and Tobago Carnival Bands Association, said it would be a missed opportunity if we did not take advantage of the virtual space to showcase what T&T has to offer.

“The emergence of this pandemic allows us to be innovative and the virtual platforms are there for us to do something safely. The thought of something virtual has come up and I have suggested one or two things to the NCC and I do believe we could present something to the world and we could reach markets we never reached before,” she said, noting that there is a lot of footage from carnivals past that could create compelling content.

“I understand what he meant when he said no Carnival 2021, but I certainly think a virtual event is opportunity that cannot be missed.”

A virtual celebration of Carnival will also have to take the private promoters into account.

DJ Private Ryan, who holds the popular Carnival Saturday Soca Brainwash fete said planning a virtual event is challenging and difficult considering that T&T is the mecca of Carnival and there are multiple elements to be considered such as all the mas bands, soca artistes etc getting airtime.

“It is not as easy as it may seem and that planning should have started already, the blueprint should have been laid out,” he said.

He said in his case, he is still thinking about what could be done since he does not know what state the country will be in come February and if regulations will allow for any gatherings.

He said: “It is really adapting to the world ahead of us and finding ways to make it international and stay within the regulations. We will wait and see. If we can’t do anything physically we have no other choice but to go online or sit it out entirely.

COVID-19 delays Rio's Carnival for first time in a century

COVID-19: Organisers pull the plug on Carnival in Jamaica