History made as Lord Nelson statue in Barbados decommissioned 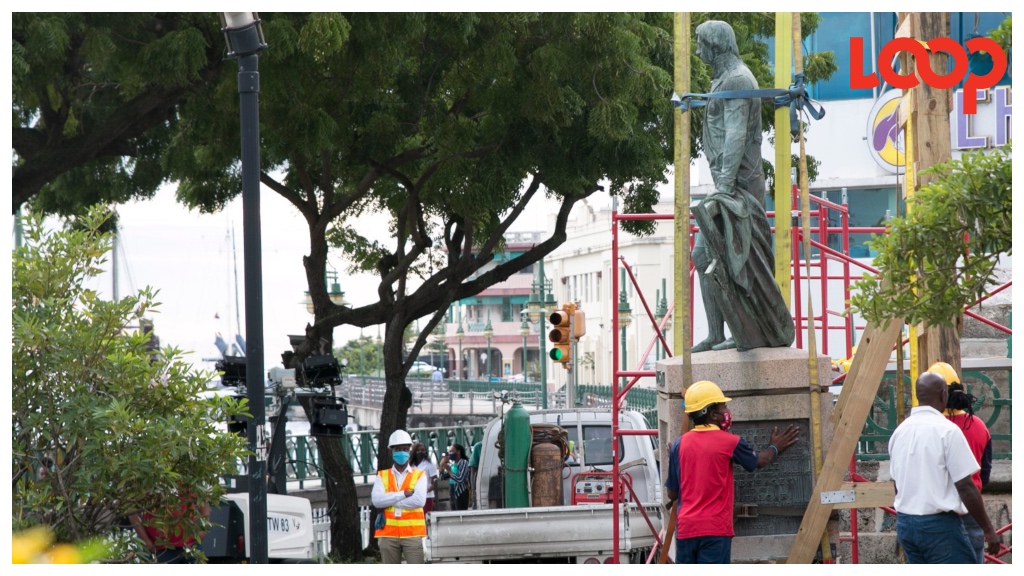 Lord Horatio Nelson's final moments in the National Heroes Square before being transported to the Barbados Museum.

Dozens of Barbadians gathered in the heart of Bridgetown on Monday to witness history in the making, as the eight-foot statue of Lord Horatio Nelson was dismounted from the National Heroes Square.

For over two centuries, the statue has stood in the heart of the city and maintained a subject of controversy and it was a remnant of the pre-emancipation era, a slave owner that was against the abolition of slavery.

The two-hour ceremony featured an array of performances from local entertainers such as Israel Lovell Foundation and the Haynesville Youth Group, as well as a special performance from cultural ambassador the Mighty Gabby and Nikita.

As the statue was removed from its foundation, crowds gathered with their cameras and phones to capture Lord Nelson's final moments in the Square.

The Barbados Museum and Historical Society will now be the new home of the cultural artefact.

During her feature address, Prime Minister Mia Mottley stated promised that going forth, Government will ensure that the National Heroes Square will reflect individuals who contributed to the development and growth of Barbadian society.

"While we accept that the statute of Vice-Admiral Lord Horatio Nelson is an important historical relic, it is not a relic to be placed in the national heroes square of a nation that has to fight for too long to shape its destiny," she held.

She pointed at individuals such as Granville Williams, patriarch of the Barbados Spiritual Baptists should be memorialised for their contributions.

"We need to rename the bus stand after Granville Williams, not simply because of his relationship with transport . . . but it was his relationship in trying to find public spaces in which he could create that space for people to lift up their hands and praise their God in the way they wanted to do and not the way they were required to do," Prime Minister Mottley remarked.

The Prime Minister stated the current Government could not take full credit for the removal of Lord Nelson, as the movement for his removal had been ongoing for over 20 years. She stated that the likes of Sir Keith Hunte of the National Committee on Reconciliation, the Committee for The Reestablishment for the Symbols for the National Heroes Square chaired by George Brancker as well as the director of Barbados Museum and Historical Society Alissandra Cummins, CARICOM Ambassador David Commisiong and others should be commended.

Mottley contended that creating a national identity was important and was at the forefront of Government's agenda. She stressed that difficult conversations on heritage and identity needed to be had with future generations.

"This government has been very clear that national consciousness and identity come at the core of the nation-state and if we do not know who we are, if we are not clear what we will fight for then we are doomed to be exploited and colonized again. Not necessarily in the same way that led to ships coming in but in the way that will allow the mental spaces to be dominated by stories and songs and messages that are not our own and that are not intended to be able to lift up our people to where we need to go in this world today."

Broaching on the topic of Barbados' republican status, the Prime Minister said that it was not an arbitrary decision. She asserted that the decision was to enforce Barbados' status as an independent state.

"We ask simply that persons do not take that assertion of belief in ourselves and in the worthiness of our state to have a Barbadian as a head of state as an action that is inimical to the interest of others because it is not intended to be it. It is simply a recognition that the time has come for us to take care of our house without disrespecting anyone else’s house."

Lord Nelson gets his walking papers! Close to $20,000 to move soon