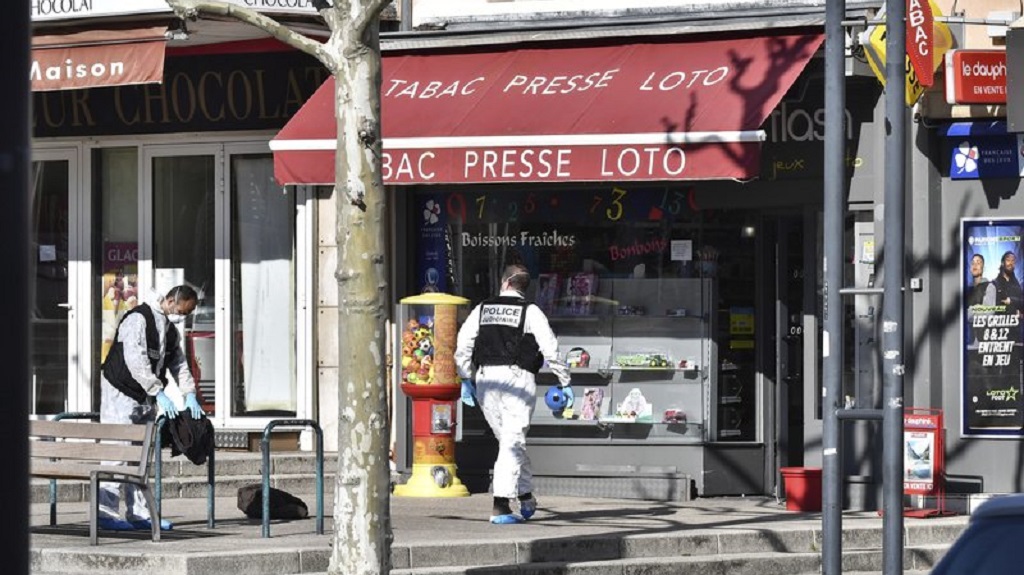 FILE - In this April 4, 2020 file photo, police officers investigate after a man wielding a knife attacked residents venturing out to shop in the town under lockdown, in Romans-sur-Isere, southern France. French counter-terrorism prosecutors have opened a judicial investigation for murders and attempted murders in relation with a terrorist undertaking, four days after a knife attack south of Lyon left two people dead. (AP Photo, File)

France's counterterrorism prosecutor's office says it has opened an investigation into a knife attack Friday near the former offices of satirical newspaper Charlie Hebdo that wounded at least two people.

The investigation was opened into "attempted murder in relation with a terrorist enterprise," according to an official at the prosecutor's office.

One suspect has been arrested.

It is unclear what motivated the attack or whether it was linked to Charlie Hebdo, whose offices were hit by a deadly Islamic extremist attack in 2015.

PARIS (AP) — At least two people were wounded in a knife attack Friday near the former offices of the satirical newspaper Charlie Hebdo in Paris, police said Friday. A suspect has been arrested.

Police initially announced that four people were wounded in the attack, but the official told The Associated Press that there are in fact only two confirmed wounded. Police could not explain the discrepancies.

It is unclear what motivated the attack Friday or whether it had any link to Charlie Hebdo, which moved offices after they were attacked by Islamic extremists in 2015, who killed 12 people inside.

AP reporters at the scene of Friday's police operation saw officers flooding into the neighborhood, near the Richard Lenoir subway station. Police cordoned off the area including the former Charlie Hebdo offices after a suspect package was noticed nearby, according the police official.

Police did not release the identities of the attacker or the wounded, who are in "absolutely urgent" condition, the official said. The official was not authorized to be publicly named.

Prime Minister Jean Castex cut short a visit to a suburb north of Paris to head to the Interior Ministry to follow developments.

The trial in the Charlie Hebdo attacks is currently underway across town. Murmurs broke at the terrorism trial of 14 people, including 3 fugitives, accused of helping the attackers in the January 2015 killings, as the news filtered through.

The widows of the Charlie Hebdo attackers are scheduled to testify Friday afternoon.

14 on trial for 2015 Paris attacks that sparked terror wave