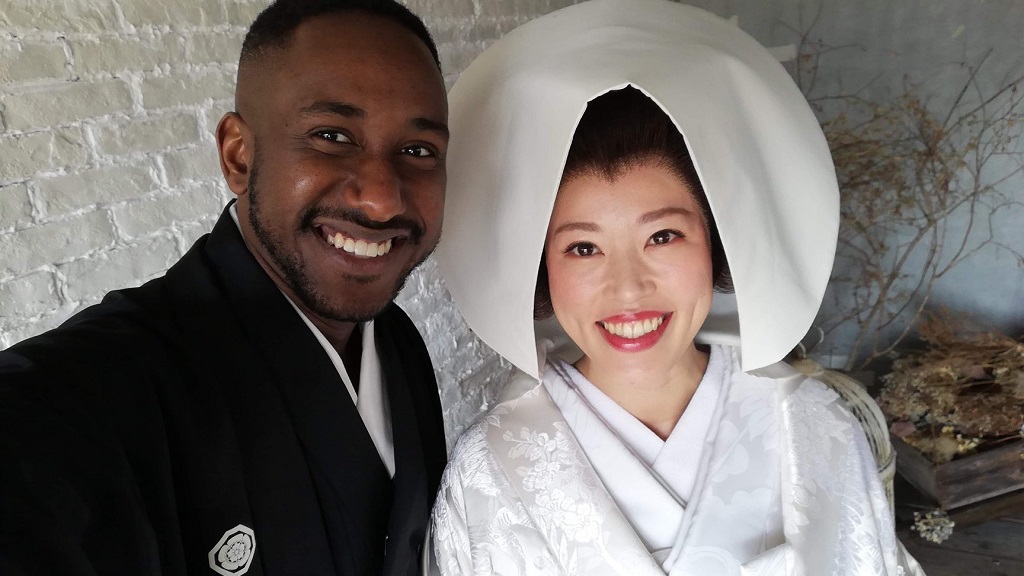 Photo via the Embassy of Japan in Trinidad and Tobago/Facebook.

While teaching English in Japan, a Trinidadian man found true love, a family and his second home.

Knikkoliev Seebaran, who works in Japan through the Japan Exchange and Teaching (JET) Programme, shared his story through the Embassy of Japan in Trinidad and Tobago.

Seebaran got married in December 2019 and said he and his wife now have a daughter, and although he was worried about how his daughter, being of mixed race, would be treated, he said his community is very welcoming:

‘This year, my wife and I had a baby girl. Before she was born, I had a huge fear about her being treated differently, being half Trinbagonian and half Japanese.’

‘There’s a lot of speculation about the mistreatment of “half-fu” in Japan. But after spending so much time, sharing my culture with my fellow co-workers and neighbours, I realized that things will be ok.’

He said learning about the dating culture in Japan was also an eye-opening experience.

‘Dating in another country can be difficult, especially if you have a limited grasp of the language. After living in Japan for about 2 years, I found myself looking for companionship.’

He said respect is key in establishing relationships:

‘Over time, I eventually learned to understand the cultural behaviour of Japan’s lifestyle and I have concluded that confidence is important. I learned how to respectfully speak to Japanese women while making it easy for them to talk to me. And this is how I met my wife.'

'By being open and honest to her about finding someone to enjoy the rest of my life with, she immediately agreed to date me and things escalated quickly. Being over 30 years old, we concluded that we have done everything we ever wanted to do in our young life and our last dream was to settle down and have a family. So we did not waste time.’

(Photo via the Embassy of Japan in Trinidad and Tobago/Facebook.)

He said as there is no Trinidad and Tobago Embassy in Japan there was a bit of difficulty in arranging his documents for the marriage, however, he was able to arrange it just in time for Christmas day.

‘My marriage was on Christmas day 2019. This happened because we had a lot of issues in finding time to finalize all our documentation. Since Japan doesn’t have a Trinidad and Tobago Embassy, I had to get all my documents to and from Trinidad, directly. But my mom always told me, “everything happens for a reason”. Now my anniversary IS on Christmas day and I think that is a much more special (and easier to remember) day.’

And as for his knowledge of Japanese, he said he’s constantly learning.

‘My Japanese level isn’t as great as most people would think but I was lucky to find a very intelligent and beautiful Japanese woman who is willing to “put up” with my faults and silliness.

‘Most people told me that my Japanese skill will improve because now I have a Japanese wife but I don’t think it’s fair to her to be my wife and my teacher. I am on my own path in learning Japanese so whenever I go home to her, I want to go home to my wife. She appreciates my decision but she always finds ways to test my Japanese ability.’

He said he was grateful for this new direction in his life, thanks to the JET programme.

‘I’m very thankful for all the opportunities that the JET programme has offered and to all the people who have helped me to get to this point in my life.’

For more information on the JET programme visit the Japanese Embassy in Trinidad and Tobago on Facebook: https://www.facebook.com/JapanEmbTT/

Death toll from flooding in Japan rises to 50, dozen missing

The Latest: Japan, US agree to cooperate in COVID-19 fight