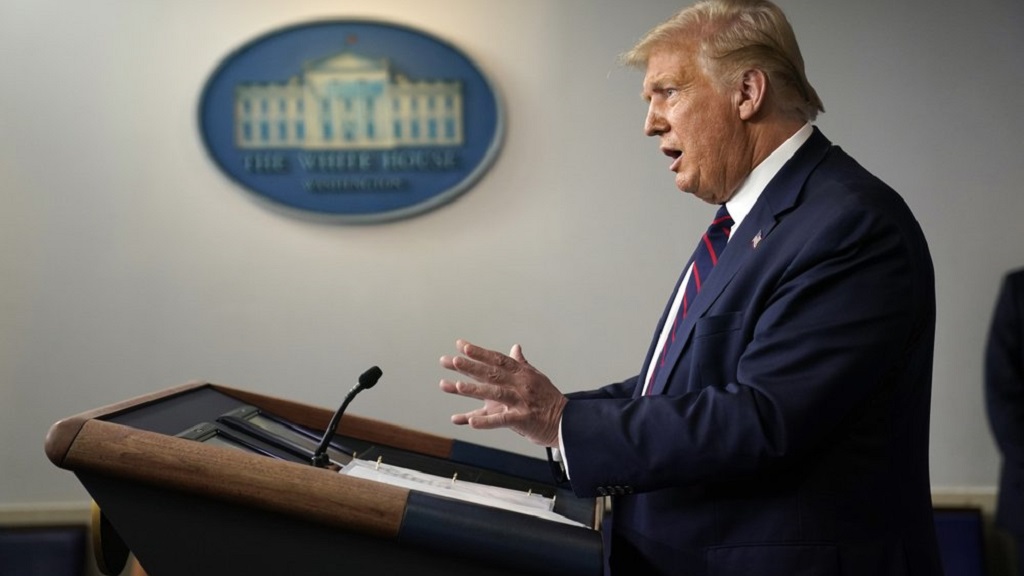 President Donald Trump repeatedly tests the Republican Party's limits on issues including race, trade and immigration. Now he has struck a boundary.

GOP officials from New Hampshire to Mississippi to Iowa quickly pushed back against Trump's suggestion on Thursday that it might be necessary to delay the November election — which he cannot do without congressional approval — because of the unfounded threat of voter fraud.

They reassured voters that the election would proceed on the constitutionally mandated day as it has for more than two centuries.

Iowa Senator Chuck Grassley was especially blunt: "All I can say is, it doesn't matter what one individual in this country says. We still are a country based on the rule of law, and we want to follow the law."

New Hampshire Governor Chris Sununu vowed his state would hold its November elections as scheduled: "End of story." Representative Liz Cheney, R-Wyo., who leads the House Republican Conference, said, "The resistance to this idea among Republicans is overwhelming."

The top Republicans in the House and Senate, who have spent the past four years championing Trump in Congress, also distanced themselves from the notion of a delayed election.

It was a rare rebuke for Trump from his fellow Republicans but one that might not last. There was little conservative opposition to Trump's broader push to raise questions about the legitimacy of the November 3 election, including his suggestion later Thursday that a delayed result because of mail-in ballots would be a sign of fraud.

The simple reality remains that Republicans up and down the ballot this fall need Trump's fervent base on their side to have any chance of winning.

The dynamic has forced Trump-backed politicians to walk a delicate balance as they condemn the president's most erratic behaviour and ideas while trying not to upset his die-hard loyalists.

At the same time, many Republican leaders are struggling under the weight of health, economic and social crises that the Trump administration has failed to contain.

The government announced Thursday that the US economy plunged by a record-shattering 32.9 percent annual rate last quarter as the pandemic forces a wave of layoffs that shows no sign of abating.

Mississippi Governor Tate Reeves, in an interview with The Associated Press, said he feared "a new wave of economic downturn" as he grapples with pressure to institute a second stay-at-home order as coronavirus infections in his state surge.

The first-term Republican governor said he would do "everything possible" to avoid another shutdown but could not rule out the possibility.

Reeves encouraged Trump to embrace a re-election message focused on his ability to revive the nation's economy, a familiar suggestion from frustrated Republican officials, though the president has shown little interest in adopting a consistent message.

Reeves said he opposes any plan to change the election date: "I don't personally think a delay in the election at this point in time is necessary."

But he said he remained "100 percent committed to doing everything possible" to help Trump beat Democratic rival Joe Biden in November.

"I don't believe that the president is losing significant support from Republicans," Reeves said.

Indeed, Trump confidant Jerry Falwell Jr., the president of Liberty University, said he would support Trump's call to delay the election "until things are normal so people can walk in."

"If it takes a few more months, then so be it," Falwell said in an interview, raising the prospect of limiting the president's powers if the delay extends beyond his first term.

There have been a handful of moments that strained the GOP's allegiance to Trump since he emerged as his party's unlikely presidential nominee four years ago, yet his party has increasingly acquiesced to his turbulent leadership as his presidency progressed.

Just weeks before the 2016 election, several elected officials, including then-House Speaker Paul Ryan, publicly turned their back on Trump after he was caught admitting sexual predatory behavior in an "Access Hollywood" video.

Less than a year later, the Republican National Committee rebuked the president after he claimed there were "very fine people" on both sides of a deadly white supremacist rally in Charlottesville, Virginia.

And Republican leaders briefly raised concerns last year when Trump was caught pressuring Ukrainian leaders to investigate Biden — an episode that would ultimately lead to his impeachment.

There have been a series of lower-profile flashpoints over the last four years that prompted modest concerns from Republicans that were quickly forgotten, and the latest debate over the election date may soon fall into that category.

Trump cannot change the election date without the approval of Congress, and policymakers in both parties made clear they would oppose such a move. Trump's ultimate goal, however, may have less to do with the election date than undermining the results of the election if he loses.

Current polls suggest that Trump is trailing Biden by a significant margin in several swing states.

The Republican president did not deny that he was trying to cast doubt about the election results when asked directly during Thursday's press briefing.

Instead, he repeatedly cited the prospect of voter fraud, which is virtually non-existent in US politics.

"I don't want to delay. I want to have the election. But I also don't want to wait for three months and then find out that the ballots are all missing, and the election doesn't mean anything," Trump said, warning of the possibility of "a crooked election."

Back in New Hampshire, a swing state where Trump hosted a virtual event Thursday night, Sununu said the president's comments about the election date would not affect his continued support for Trump's reelection.

"Look, the president says things and tweets things all the time," the governor said. "I don't know what his thought process is there. I can only speak for New Hampshire, and we have a great system."