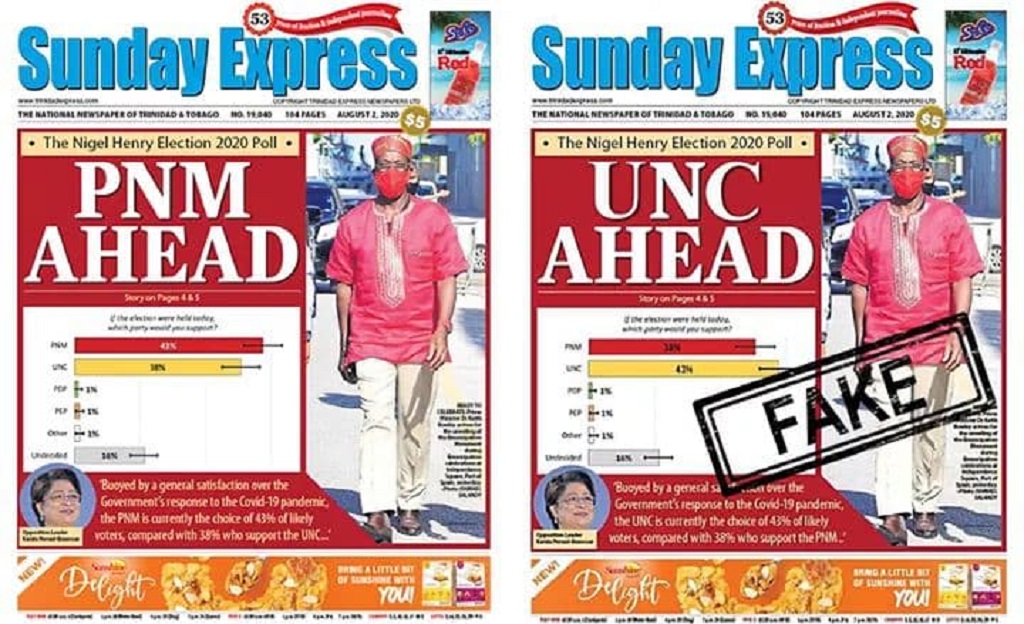 The Trinidad & Tobago Publishers & Broadcasters Association (TTPBA) has slammed what it considers to be the “wanton disregard” for copyright infringement on social media platforms.

This follows the misrepresentation of the Sunday Express’ front page which appeared to have been photoshopped. On August 2, the daily newspaper highlighted a poll ahead of the August 2 general elections. ‘PNM ahead’ was the main headline. However, this was changed to ‘UNC ahead’ with the graph showcasing the false change.

“Not only is there a legal infringement with the use of the newspaper’s masthead, but the work of the independent pollster Nigel Henry, has been altered by the change in the chart depicting the response to a question. This therefore raises the other scourge, that of the employment of Fake News as a tool to influence the views of those who so opt to use social media as a source of information,” the association said in a statement,

Furthermore, the TTPBA advised the public to scrutinise social media content and question the source of information in every case with the prevalence of fake news. This, as it expressed concern that a reputable agency was brought into disrepute.

“And it is this questioning of the source that is egregiously wrong, and particularly disappointing to the TTPBA, as the imagery of a reputable daily newspaper has been used to confuse the public.”

The Association further noted that Copyright Act 8 of 1997 states in:

– Section 5(i) the works of lithography (newspapers) are protected

– Section 8(i) the owner of copyright shall the exclusive right to authorise, reproduction of the work; adaptation, arrangement or other transformation of the work

The TTPBA said given the seriousness of the issue, police ought to launch an investigation.

“The role of the police in working with the software platforms to track down and eliminate this problem can also not be overlooked.”