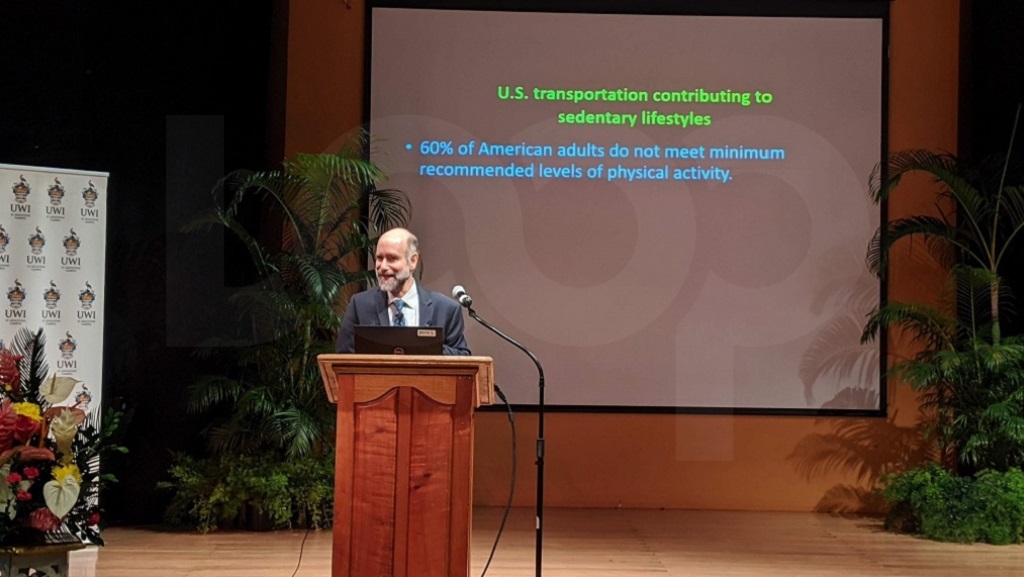 Photo: Professor Jonathan Patz speaks at the Caribbean Planetary Health Conference at the University of the West Indies (UWI) on January 19, 2020, which was organised in collaboration with the Planetary Health Alliance. Photo by Alina Doodnath.

Trinidad and Tobago can benefit from switching to renewable energy, which has been shown to generate up to five times more jobs compared to coal, oil and gas combined in the US.

That's according to Jonathan Patz, MD, MPH, who is Professor & John P. Holton Chair in Health and the Environment at the University of Wisconsin-Madison, where he also directs the Global Health Institute.

Patz was speaking at the Caribbean Planetary Health Conference at the University of the West Indies (UWI) on January 19, 2020, which was organised in collaboration with the Planetary Health Alliance.

Patz referred to the 2017 US Energy and Employment Report which showed that the solar workforce increased by 25 percent in 2016 while wind employment increased by 32 percent.

“(The report) talked about five times more employment in renewables compared to jobs in coal, oil and gas combined.

“Wind, solar and battery advances have been big. The price of solar storage has also been dropping. The cheapest plant you can build now is renewable energy.”

“I’m not from Trinidad and I know that for Trinidad and Tobago, your finances come from oil and gas. I don’t know how hard the transition would be but, it’s a different playing field now with the lower price of renewables.”

“The future is renewables,” he said.

BHP Billiton said in its January 21, 2020 update for the second half of 2019 that petroleum production decreased year-over-year, while natural gas production fell by eight percent.

Meanwhile, coal-fired generation employment declined in the US by more than 6,600 jobs, or 7.2 percent in 2019.

“Climate change is, absolutely, a public health crisis,” Patz said in a TedX talk in January 2018.

Patz, who was also a lead author for 14 years for the UN Intergovernmental Panel on Climate Change (IPCC), said studies have linked climate change and global warming to increases in vector-borne diseases such as yellow fever, dengue and malaria, as well as diseases like asthma, heat stress, heart attacks, and urban heat island effect.

Patz noted that studies have shown that a decrease in green spaces showed a correlational increase in mental illnesses such as depression and anxiety.

“When we think about urban design there’s another element and that’s green space. There are studies that show relationships to the amount and green space in the city compared to depression, stress and anxiety,” he said.

Patz said the benefits of clean energy far outweigh that of fossil fuels when accounting for the savings derived from the health benefits which would accompany less pollution.

He pointed to studies which showed that an increase in cycling instead of driving for short distances could result in savings of up to US$8 billion per year, could save up to 1,300 lives.

“Regardless of one’s views on climate change science, we can all support safe routes to schools, physically fit children and adults from cities designed for people, not just cars, clean air from low-carbon energy, green jobs and lots of them, and preserving natural resources for a healthy future.”

“Confronting the global climate crisis is the greatest human health opportunity of our lifetime and we can’t afford not to confront this challenge,” he said.