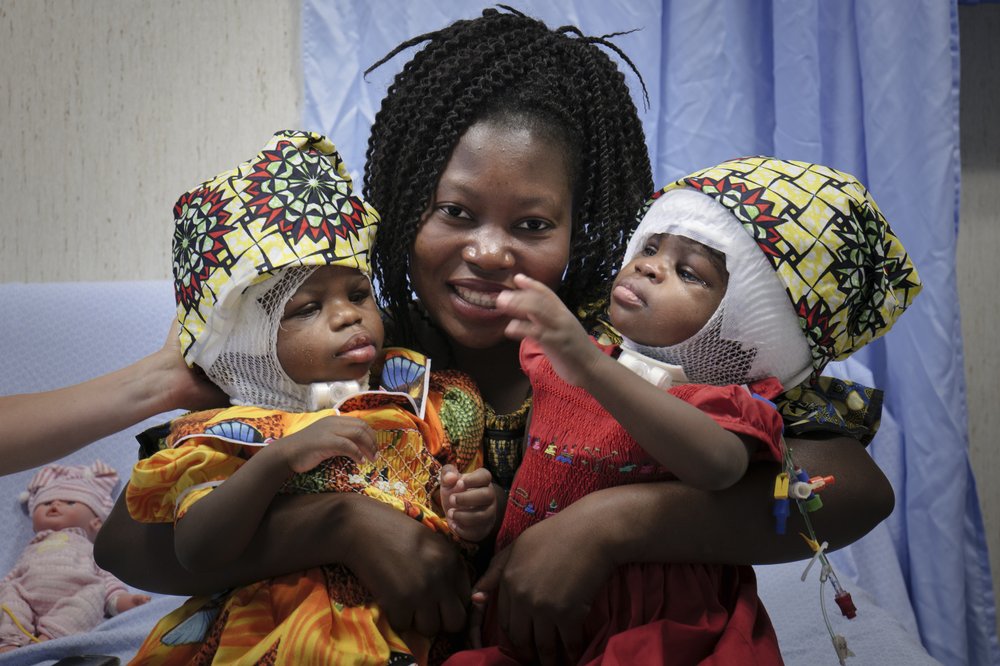 Doctors at the Vatican-owned paediatric hospital revealed this week that they have successfully separated conjoined twins.

Their skulls were fused back-to-back, an exceedingly rare surgery for an equally rare congenital defect.

The twins, Ervina and Prefina Bangalo were born two years ago on June 29, in Mbaïki, a town in the Central African Republic, with their heads attached and sharing critical blood vessels around their brains.

CHECK OUT THIS CLIP DOCUMENTING ERVINA AND PREFINA'S JOURNEY

Such cases of conjoined twins occur once in every two million births or so.

The Bambino Gesù Paediatric Hospital, which is Vatican-owned but operates within the Italian public health system, brought the twins and their mother to Italy soon after their birth.

The hospital said the toddlers are recovering well a month after their third and definitive separation surgery on June 5.

Video released by the hospital showed the girls waving along to music from their beds, clapping and holding markers.

They were celebrating their second birthday in their mother’s arms as hospital staff sang ‘Happy Birthday’ to them in Italian.

The key goal of the surgery was ‘to obtain a separation with the girls in perfect condition… the objective was very ambitious, and we did everything to reach it,’ said Dr Carlo Marras, chief of paediatric neurosurgery at the hospital.

Marras led the team that worked for nearly two years planning and executing the separation.

At a press conference to announce the outcome of the sisters’ surgery, Marras revealed the prognosis: ‘these girls can have a normal life’ after a phase of rehabilitation.

There have been successful separation surgeries in the past of twins joined at the head, but most have been for twins whose heads were fused vertically, at the top.

Ervina and Previna’s skulls were joined back-to-back in what is known as ‘total posterior craniopagus’ (tongue-twister, we know).

That made the surgery particularly challenging since the back of the head is a far more critical place for blood supply to the brain and drainage of blood away from it, according to Dr Jesse Taylor, head of plastic surgery at the Children’s Hospital of Philadelphia.

During his tenure, Taylor has participated in some separation surgeries.

‘It’s one of those configurations that I think a lot of centres, when they see it, say, ‘You know, we’re not sure that this can be done safely,’ he said.

‘The venous drainage tends to be the main limiting step for separability’ in twins connected at the back of the head.

He said in typical separation surgeries, doctors can ‘borrow’ some blood vessels to give to each twin.

‘But when it comes to the back of the head, you don’t have a lot of wiggle room for borrowing veins,’ Taylor explained.

Marras said that indeed, the most complicated aspect of the Bangalo twins’ separation was to give each child autonomous venous drainage systems — procedures that began with two surgeries in May and June 2019.

The final, 18-hour surgery last month to physically separate them involved a team of 30 doctors and nurses, who made use of 3-D imaging and neurostimulators.

Before the separation surgery, members of the Vatican hospital’s staff gave the girls mirrors so they could see one another.

They knew what each other sounded like, but the mirrors helped them associate facial expressions with their personalities and sounds, Marras said.

‘It was an experience that wasn’t just professional but above all human: To think that you can arrive at something that we had only imagined, with all the possibilities of failure. It was a magical moment…marvellous!’ he said.

Marras said there was only one previously known case of a separation of twins conjoined at the back of the head, performed in the US during the 1980s.

He said the outcome, in that case, was poor, referring to the 1987 surgery at Johns Hopkins University by a team led by Dr Ben Carson.

An Associated Press story from 1989, two years after the surgery, said one of the boys was in a vegetative state and the other had severe developmental delays.

In the case of the Bangalo sisters, Marras said the girls so far have suffered no neurological harm.

The twins’ mother, Ermine Nzotto, wiped tears from her eyes as she watched a video prepared by the hospital of the twins’ before and after their separation.

Nzotto said she never went to school but hopes her daughters would study to become doctors.

‘It’s a joy that I can see my girls run and play like other children. May they tomorrow study and learn to become doctors to save the other children of this world,” she said through an interpreter.

She expressed gratitude to Marras, the hospital president and Pope Francis, and said she also hopes that Francis will now baptise her girls.

Hospital President Mariella Enoc met the twins soon after they were born during a visit to the Central African Republic and was the driving force behind bringing them to Rome and seeing if they could be separated.

She said deciding to do so created ethical and economic questions, since the cost of 1 million euros (US$1.1 million) paid for primarily by the hospital foundation, could have been spent on less-risky procedures that might have benefited more children.

But, Enoc said: ‘When you find a life that can be saved, you have to save it.’

Romain and Elizabeth Virgo have twins!

Celebrity twins: 10 stars you didn't know had a sibling