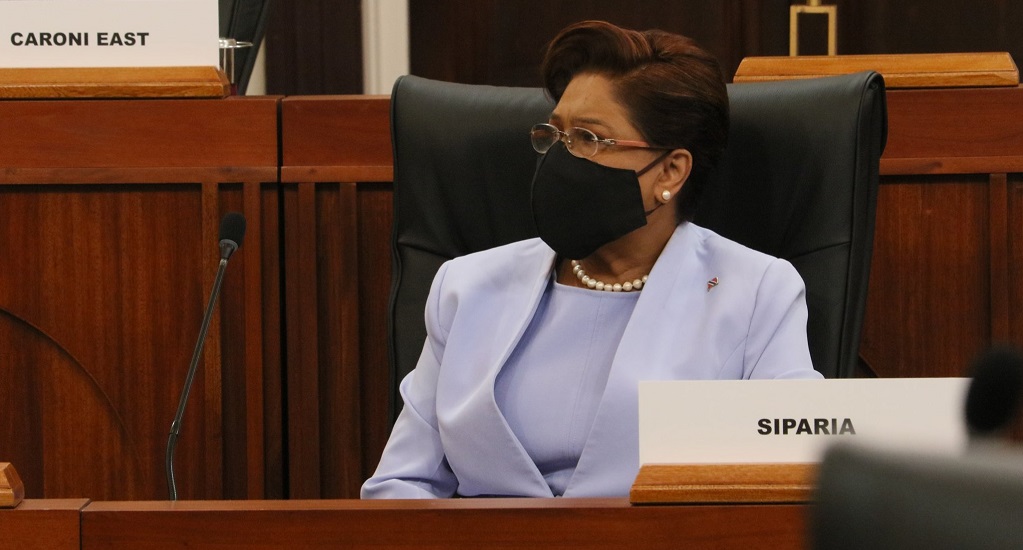 Photo via Facebook, the Office of the Parliament of Trinidad and Tobago.

The United National Congress (UNC) has accused Government of “making policy on the fly”.

In response to an announcement by Prime Minister Dr Keith Rowley on Saturday of the operationalisation of phase two of the reopening of the economy, UNC leader Kamla Persad-Bissessar criticised Government’s plans.

She said Government has no cohesive plan to restart the economy, preserve jobs or provide assistance to the vulnerable in our society, claiming that the Prime Minister offered no words of hope or comfort for those affected by the pandemic.

Taking note of a new relief grant for maxi-taxi drivers announced by the Prime Minister, she questioned whether previously announced grants like the salary relief grant have been paid to citizens.

“The announcement of another grant for Maxi Taxi drivers and their owners in the value of $2000 is all well and good, however, there are thousands of citizens still yet to receive their promised salary relief grants.”

“Since being announced in March, according to the Government’s own reports, only 12,000 persons have been able to access the $1,500 grant.”

She added: “By his own admission, the delivery of grants has been bogged down in red tape, but has done little to fix the problem. In the meantime, thousands of families are unable to feed their families.”

Lamenting that a large segment of citizens employed in the private sector have been home without any financial support for well over two months now, Persad-Bissessar questioned why businesses not allowed to reopen under guidelines from the Ministry of Health for safe work practices for all industries.

The UNC leader again criticised low levels of testing for COVID-19 as she noted the Prime Minister’s warnings on second waves of the virus being experienced in other countries.

“Rowley was at pains to point out examples of other countries where early easing of restrictions led to the dreaded “second wave” of the virus. However, in all of the examples given widespread testing was done, as well as contact tracing. To date, Trinidad and Tobago remains reliant on one laboratory for testing.”

Persad-Bissessar said while her party is aware that navigating the country out of the danger presented by COVID-19 will be difficult, it requires innovative thinking and political will.

Kamla: Massive layoffs will occur without plan for resuming businesses

Update: 2 charged in connection with theft of 3 goats, 6 sheep