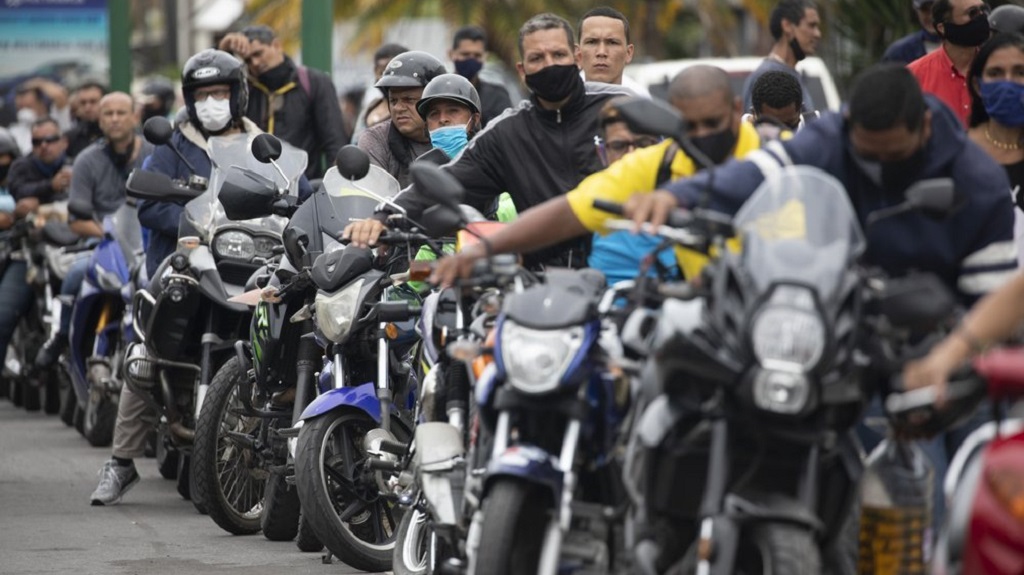 Motorcyclists wearing masks amid the new coronavirus pandemic wait their turn to fill up at a gas station in Caracas, Venezuela, Tuesday, Sept 8, 2020. Gasoline shortages have returned to Venezuela, sparking mile-long lines in the capital as international concerns mounted that Iran yet again may be trying to come to the South American nation's rescue. (AP Photo/Ariana Cubillos)

Gaasoline shortages have returned to Venezuela, sparking mile-long lines in the capital as international concerns mounted Tuesday that Iran yet again may be trying to come to the South American nation's rescue.

Three Iranian tankers that delivered gasoline to Venezuela earlier this year have turned off their location tracking devices for up to three weeks, raising suspicions among global ship trackers that the tankers are again headed to Iran's ally.

Iran uses cloaking to evade detection by the United States, which seeks to block shipments to Venezuela in a campaign aimed at forcing socialist President Nicolás Maduro from power.

Samir Madani, a co-founder of the independent oil tracking firm TankerTrackers.com, said it is possible the three ships could make the entire journey to Venezuela with their transponders off.

"Frankly, it wouldn't surprise me now at this point, given that the Iranians experiment on a weekly basis with new evasive tactics," said Madani, who tracks shipments with satellite imagery and maritime tracking data. "They're really good at that. The best, actually."

Venezuela holds the world's largest oil reserves, yet it is unable to refine enough crude to meet its domestic needs. Maduro's government blames crippling US sanctions, while critics say two decades of corruption and mismanagement under socialist rule have left the nation once-thriving oil industry in ruins.

It is unclear whether Iran is attempting to send gasoline in its ships — the Forest, Fortune and Faxon. The Iranian Embassy in Caracas did not respond to a request for comment by The Associated Press.

If so, this would be the third time this year that Iran has sent fuel shipments to Venezuela in a partnership between the two nations that are both targeted by the United States as having authoritarian regimes.

Venezuelan authorities in May celebrated the arrival of five Iranian tankers loaded with gasoline, sending fighter jets to greet them entering Caribbean waters and playing Iran's national anthem on state TV. That delivery allowed the gas pumps to provide fuel with little or no lines.

However, US officials a month ago seized Iranian gasoline en route to Maduro in a flotilla of four Greek-owned ships flying the flag of the West African nation of Liberia. No military force was used in the seizures and the ships weren't physically confiscated. Rather, US officials threatened ship owners, insurers and captains with sanction to force them to hand over their cargo.

There was no indication of how the Trump administration might respond to any further Iranian shipments to Venezuela. The US State Department didn't respond to an Associated Press request for comment.

Madani said he concluded the three Iranians tankers loaded with gasoline are heading to Venezuela because the vessels fit a pattern of an earlier shipment to Venezuela, signaling a special delivery. Most Iranian gasoline exports are shipped by foreign vessels, he said.

"The US Navy isn't going to do anything against Iranian tankers," he said. "Iranian flag means it's going to reach destination."

Venezuelans are again scrambling to fill up, even in the capital of Caracas — normally immune to shortages felt across the nation. Many pumps in Caracas are shut off and others offering fuel had lines that run over a mile.

Taxi driver Miguel Veliz, stuck in a long gas line in Caracas, said Tuesday that he didn't care where the gasoline comes from. He just wants to get back to work so he can earn a living.

Veliz said that starting Friday he had spent a total of more than 15 hours waiting at three gas stations. Twice he was turned away, and on Tuesday he hoped he would finally succeeding in filling up before his car's tank hit empty.