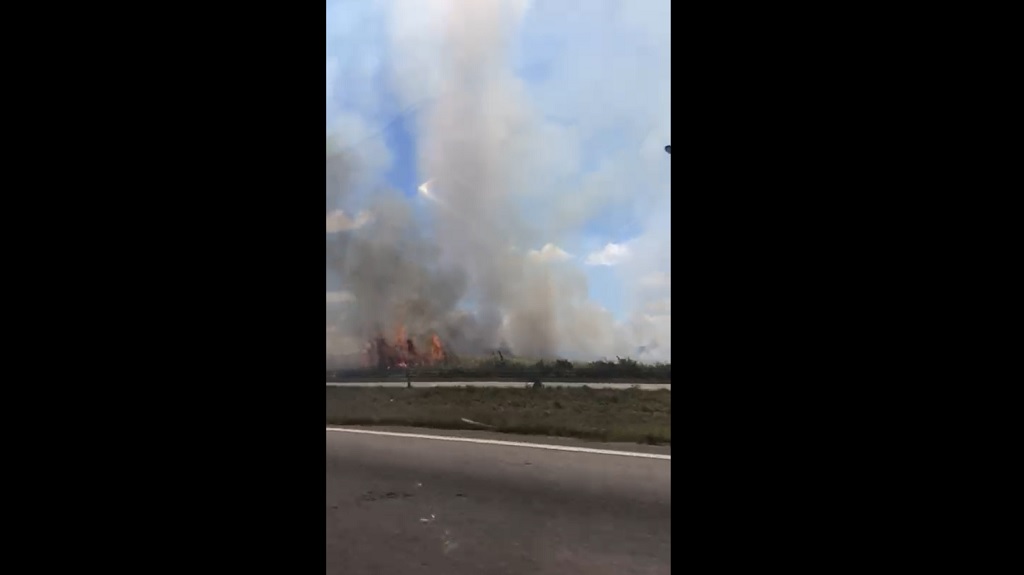 Even as the world commemorated the 50th anniversary of Earth Day, a bush fire blazed along the Sir Solomon Hochoy Highway near Couva, affecting visibility and air quality for drivers and nearby areas.

According to the Ministry of Rural Development and Local Government, the fire, which was spotted on Wednesday, was put out by fire officers, however, some smaller fires remained.

Smoke from the fire reportedly affected drivers who travelled along the highway.

Although the country is under orders to stay at home to prevent the spread of the novel coronavirus (COVID-19), this does not seem to have halted the lighting of illegal bush fires.

Environmental activist Kishan Ramcharan said during the Forest Fire Season (December 1, 2019 to June 30, 2020), reports of illegal bush fires do increase and pose a severe health risk to both humans and wildlife.

"Some people light illegal bush fires because they might want to clear land, remove rubbish, or sometimes they simply like lighting fires. But they need to abide by the laws of the land which are there for a reason. Bush fires which are started indiscriminately can result in the loss of property or even loss of life. People found without the proper permits who light these fires, can be fined."

Director of  Wildlife and Environmental Protection of Trinidad and Tobago (WEPTT), Kristopher Rattansingh, said bush fires can have a catastrophic effect on wildlife and even a forest's ability to regenerate.

"These bush fires do more harm than people would think. The effect on the environment lasts long after the fire."

"The most obvious thing is the smoke which pollutes the air and makes it difficult for people in the surrounding area to breathe, but the fire causes damage we may not immediately see."

"Many animals are killed in the fire as they're usually too disoriented or scared to outrun it. Their habitats are also destroyed so even if they do outrun the fire, their homes are destroyed and are uninhabitable for a long time, so they leave."

"When the animals leave they no longer disperse any seeds to repropagate any lost trees either so it gets worse and worse."

"After the trees and grass are destroyed they can no longer remove the carbon dioxide from the air and give us oxygen, and we need every bit of that exchange that we can get."

Minister of Agriculture, Land and Fisheries, Clarence Rambharat said there has been an increase in reports of fires in the Northern Range:

"With the seasonal conditions, the Trinidad and Tobago Fire Service responds to an increased number of fires at this time of the year. There have been a few small ones on the Northern Range."

"Our Forestry Division continues to be vigilant and provide alerts to the Fire Services which is the first responder."

"You would recall that the fine for setting a fire without a permit or justification was increased to $20,000 and it is open to law enforcement to charge persons who are found in breach of this law."

In 2016, forest ranger Keith Campbell died after fighting with others to put out a bushfire which was started illegally on Lady Chancellor Hill.

Campbell sought to put out the fire along with other rangers when a change in wind direction caused him to be trapped by the flames. He sustained third-degree burns and succumbed to his injuries on March 25, 2016 (Good Friday).

During the Forest Fire Season, which starts December 1 to until June 30 of each year, a permit is required to light outdoor fires. Permits can be obtained from the nearest fire station.

The following guidelines should be adhered to if a Permit is granted:

- Burn only during the period specified on the Permit.

- Have water readily available to extinguish a fire.

- Have extra help available to assist in controlling fire.

- Clear fire trace around the area to be burned.

- Burn small amounts at a time.

To report a forest fire in Trinidad and Tobago, citizens can call:

Lighting bush fires without a permit? Prepare to get burned