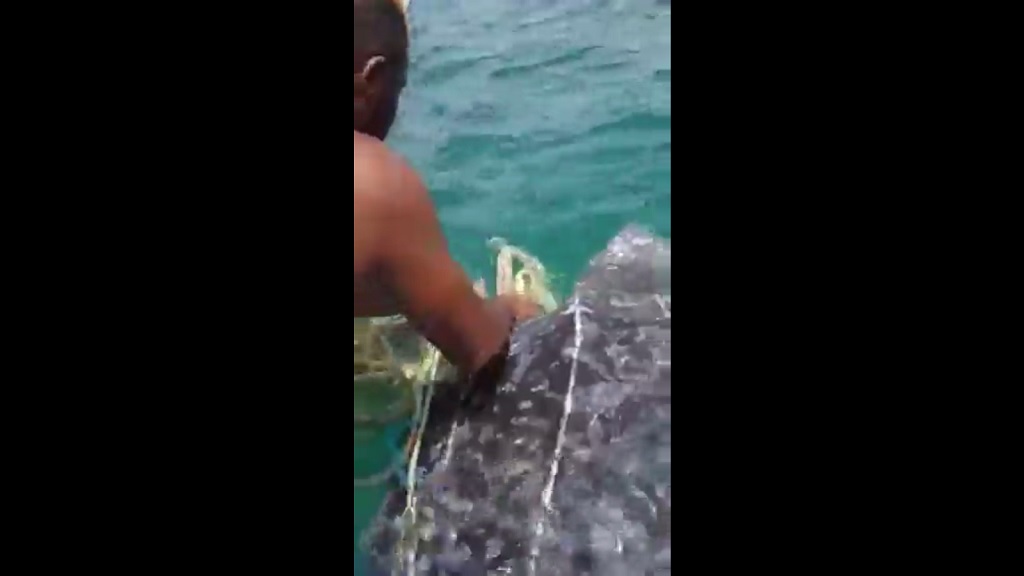 Video footage of Tobago fishermen who rescued a Leatherback turtle which was entangled in rope has gone viral online.

The video, which was shared by Facebook user Otis Walker, showed a Leatherback turtle which seemed to have become tangled in a piece of rope near Castara.

The men worked to cut the rope and free the turtle, which is listed as vulnerable and is an Environmentally Sensitive Species (ESS).

The video received over 1,000 shares online, with many commending the fishermen for their good deeds.

“Thank you so much for doing the right thing and letting her go free,” said one woman.

“God bless you for your kind for such a beautiful act,” said another.

Leatherback turtles return to Trinidad and Tobago’s shores each year to nest, completing a journey spanning thousands of miles across the Atlantic Ocean.

They are at risk from human interference including boat strikes, ghost nets, pollution, poaching, and more.

Tobago’s environmental NGOs said in a recent statement that reports have been received of turtles being slaughtered and their eggs being taken during the COVID-19 lockdown.

Tobago’s Environmental Partnership, which consists of NGOs such as Environment Tobago, Save Our Sea Turtles (SOS), the Castara Tourism Development Association, the Environmental Research Institute Charlotteville, Tobago (ERIC) and the Tobago House of Assembly (THA), said during the COVID-19 pandemic, while most of the public stayed at home, poachers were at work.

“Our iconic sea turtles which are nationally designated as environmentally sensitive species…are now seeking nesting beaches and often end up in fillet nets or are being slaughtered when trying to lay their eggs.”

“Iguanas, even mothers with egs, are illegally caught by the hundreds during the closed hunting season and often stolen from private property. The same applies to other game species which instead of being allowed to reproduce are killed and sold at much higher prices than fish or poultry.”

The groups urged the public to report poaching to the police at 800-TIPS (8477) or to the Forestry Department of Department of Marine Affairs and Fisheries at 639-1966 (in Tobago).

In Trinidad, poaching can be reported to the TTPS or to the Forestry Wildlife Division in Trinidad at 662-5114.

Watch: Endangered Green Turtle returns to the sea after injury