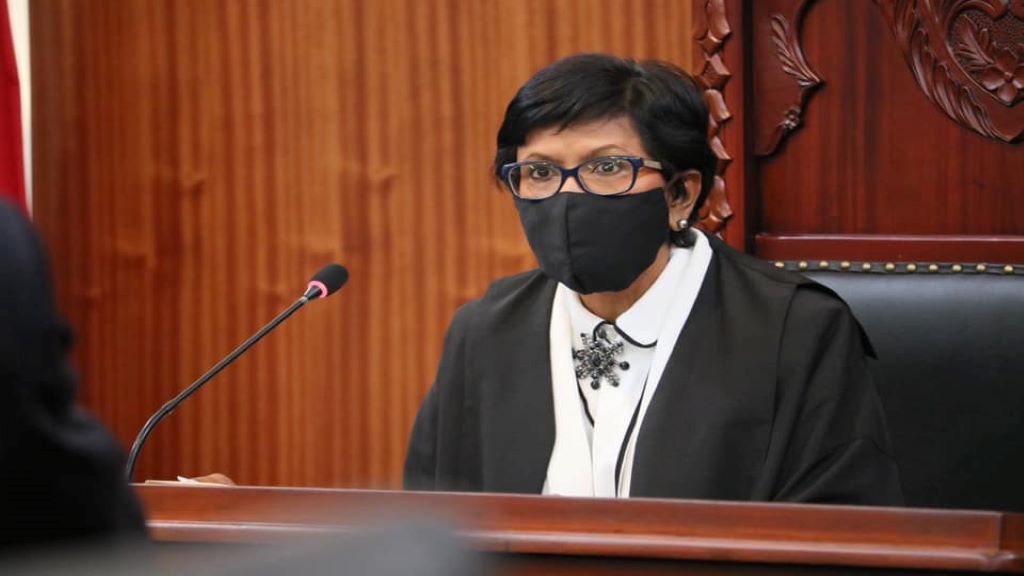 The President of the Senate, Christine Kangaloo looks on as Opposition Senator Wade Mark poses a question. © 2020 Office of the Parliament.

National Security Minister Stuart Young did not mislead the Senate in his response to an urgent question on a reported statement by the US government that T&T violated the Rio Treaty.

Senate President Christine Kangaloo gave the ruling on a question of privilege in relation to the matter raised by Opposition Senator Wade Mark during Wednesday’s sitting of the Senate.

Senator Mark, in support of his allegation that Young attempted to deceive the House, cited the Minister’s response to the questions posed on May 13, 2020. He also made reference to a media release issued by the United States Ambassador to Trinidad and Tobago on Tuesday.

Minister Young in responding to the matter raised clarified his response in the House a week ago and said he had no intention to mislead the Senate.

In making her ruling the Senate President said: “It is well recognised that one of the key ingredients to be established when it is alleged that a Member is in contempt on the grounds of misleading the House, is that it must be established that the Member making the statement knew at the time the statement was made that it was incorrect and that in making it the Member intended to mislead the House.”

Making reference to a ruling by Speaker Carr of  the  Legislative  Assembly  of  Ontario on the threshold  for finding a prima facie case  of  contempt  against a Member of the Legislature, Kangaloo concluded that there was no tangible, independently proved confirmation that it was the Minister’s intention to deliberately mislead the House.

She said: “Therefore, I rule that there is no prima facie basis to support a question of privilege.”