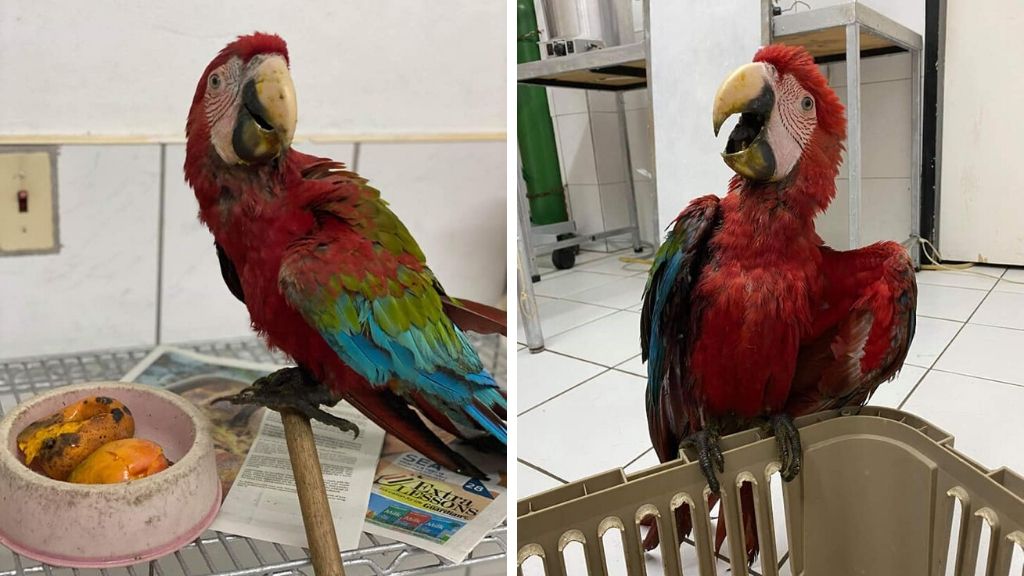 A Green Winged Macaw, loved by many, which had been shot by a poacher then taken for treatment, has died.

The macaw, which became well-known after photos of him and his clan had been shared online, succumbed to his injuries on Wednesday according to a Facebook post by veterinarian Dr Kriyaan Singh.

'It is with a heavy heart I tell you all that Paco the Red and Green Winged Macaw past away unexpectedly this afternoon.'

Dr Singh said that 'Paco', as the macaw was affectionately named, was responding well to treatment after being shot in his wing by a poacher with a pellet gun.

However, when they checked on him around 3.00 pm on Wednesday, the bird reportedly experienced seizures and then died.

'This morning he was his happy jolly, noisy, loving self. Ate fresh-picked cherries, carambola, found his way out for a stretch on our front wall and mailbox sunning out. He had a mist shower and once all dried off and ready to come in, he snuggled up and we returned him inside for the afternoon.'

'When we were taking him out around 3 for his evening stretch and to let him see his sunset he was not the same.'

'While his wound was healthy, well callused n no bleeding or infection, he had two episodes of seizures and passed a large amount of melaenic faeces. Despite our attempts he passed.'

Dr Singh said a necropsy was conducted and it was noted that there were 'hard, irregular-shaped pelleted pieces' in his stomach area.

He said it's suspected that Paco's death was due to the stress of being shot, which affected his diet as he was forced to forage in areas where his regular food was not available.

'It is suspected Paco died due to ventricular impaction with secondary endotoxemia, progressing to hypoglycemic seizures was a result of being shot, not being able to fly, and so prior to coming to us, having to forage from lower areas.'

He said another possible cause may have been that the bird was an asymptomatic carrier of avian bornavirus, which became exacerbated after the stress of being shot.

Dr Singh said Paco was a juvenile macaw and which belonged to a clan of macaws which had been photographed by hobbyist Sham Sahadeo in South Trinidad. 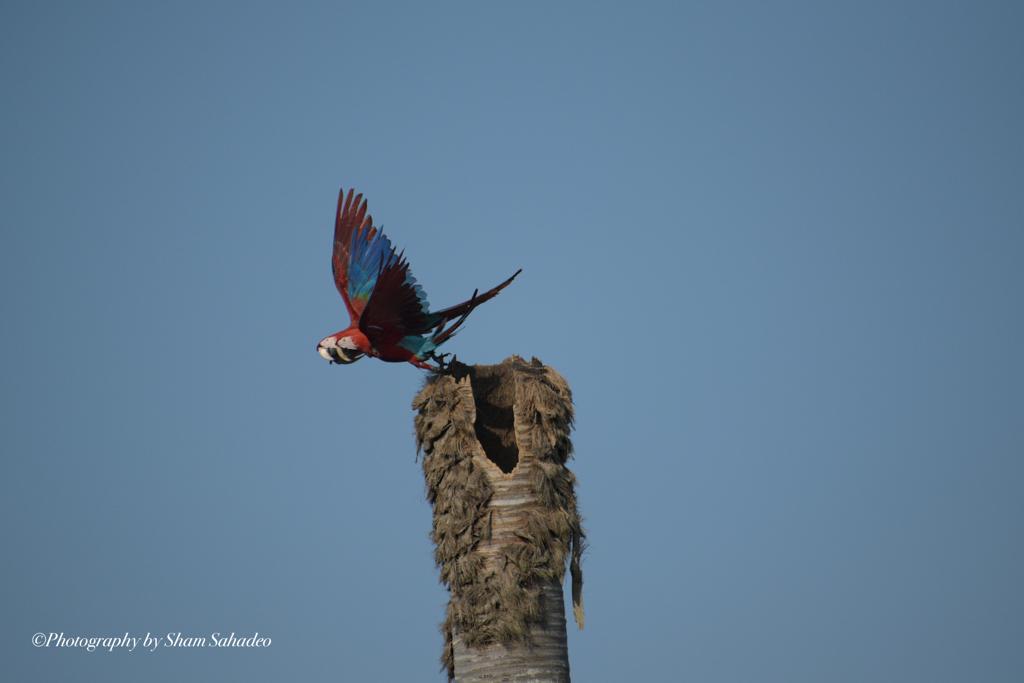 Sahadeo, along with the help of Dr Singh and Kristin Jaggernath, spotted and rescued the macaw after he noted the animal was behaving irregularly while photographing him earlier this week.

In an interview with Loop News, Sahadeo said more must be done to stop poaching and to regulate the use of pellet guns.

'Paco will live on in our hearts forever.'

A beloved Green Winged Macaw, which had been photographed in the wild in South Trinidad, now may never fly again after being shot by a poacher.

Photography enthusiast, Sham Sahadeo, who shared photos of Paco and his family in an interview with Loop News earlier this year, said he recently came across the protected birds again and realised while photographing them that something was horribly wrong.

Sahadeo shared video footage of the macaw, which was unable to take flight after being shot in the wing:

'For those who missed it...this was a video taken on Friday 3rd July, 2020 of a Green Winged Macaw (fondly called Paco) before it was realized that he had a gunshot wound to the right wing. He is now in care of vet, Dr Kryaan Singh. The rest of the clan is visibly distraught over Paco's removal (which was necessary to treat the gunshot wound). Prognosis pending on whether he would be able to fly again.’

He said by accident he came across the macaws again a few weeks ago, and found out from people in the area that the macaws were foraging for food nearby.

One of the residents led him to a tree where the macaws were seen roosting alongside some corbeaux, which he said was in itself an interesting sight to see. 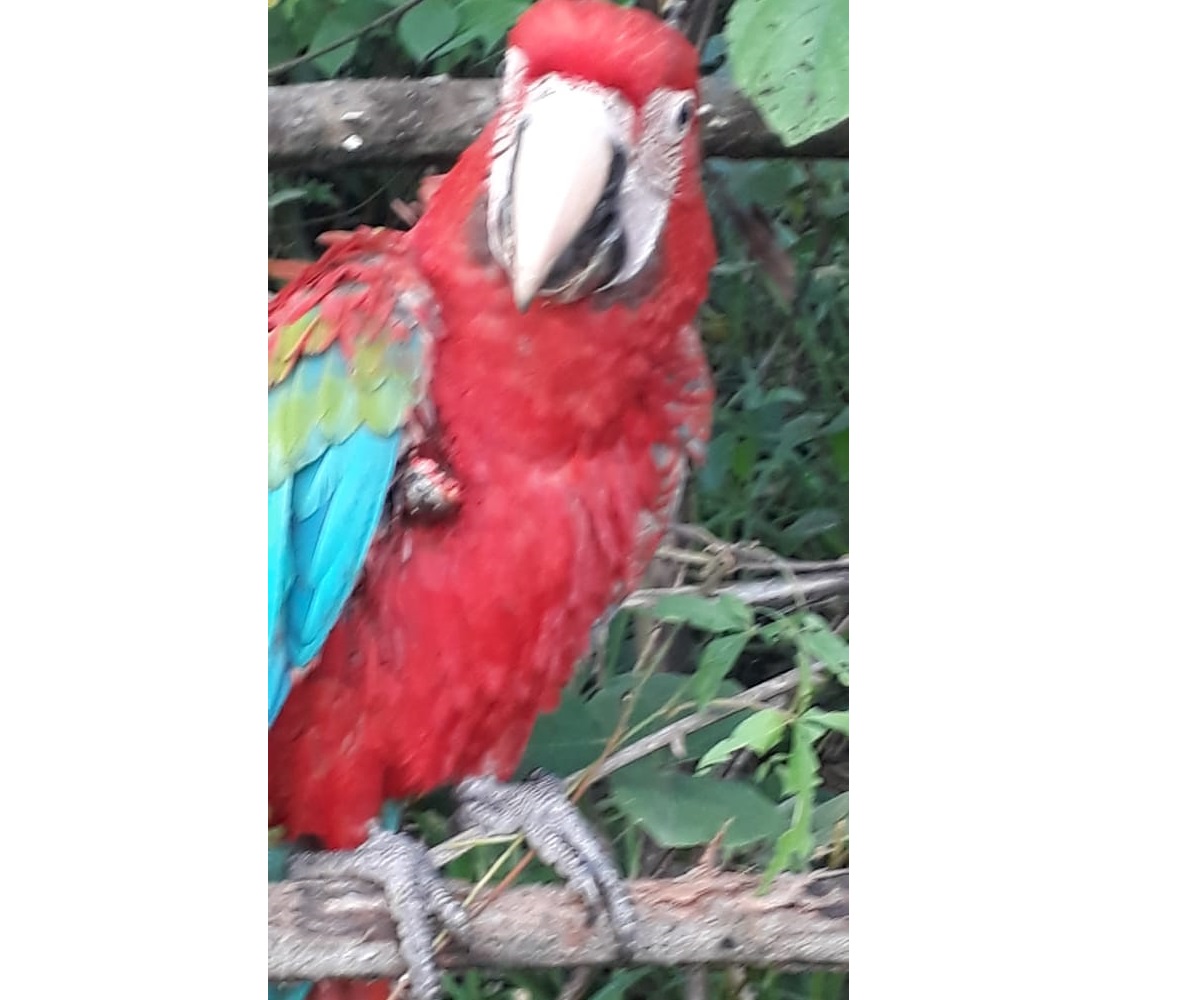 After going with a mentor, Tarran Maharaj, who was helping with his photography skills, they realised one of the cameras had a dead battery, so he vowed to return.

On the following day, despite heavy rains, they both returned to the roosting site and soon realised while photographing the macaws, that one of the birds were not flying away with the rest of the clan. It soon dawned on him that all was not well.

‘I thought it had been in a fight or something. After calling my niece, Kristin Jaggernath, who is training to be a vet, she contacted veterinarian Dr Kriyaan Singh, who advised on how to restrain the bird.  With some effort, the macaw was captured and taken to the vet. It was only after the vet examined the wound that we were informed that it was a gunshot wound.’

Sahadeo also indicated that as there was no eye witness account of who shot at the macaw, the hands of the police and the game wardens are tied. A report is to be filed and hopefully an investigation would commence into the incident.

Sahadeo said it is sad that there are not more regulations for pellet gun owners as its use is widespread and now being used by poachers.

‘In other countries, if the vet was able to identify the pellet which had been lodged in the macaw, they might have been able to determine what weapon was used and might even have been able to find out who fired at this bird, but unfortunately we don’t yet have this technology in Trinidad and Tobago to be used in these kinds of crimes.’ 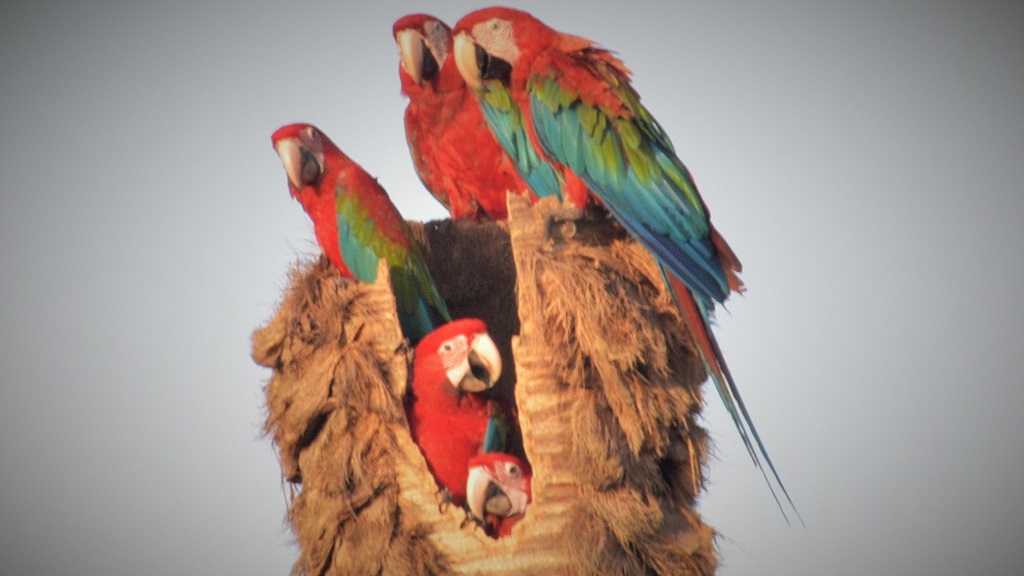 He said this act appeared to be much more nefarious than a simple act of senseless aggression.

‘Some people may think it’s just a senseless act, but it’s more than that. If a poacher can’t get the babies from their nest, they may shoot adult macaws in the wings so that they can’t fly, and then they catch them to sell, if the wound can be attended to heal.

‘I don’t think these birds are being shot randomly, I suspect that it may be for the illegal wildlife and illegal pet trade. Instead of $200 for the meat, they stand to make more money selling these animals as pets.’

'Another unfortunate side effect of this whole issue is how the rest of the family are affected. Macaws are emotionally intelligent creatures and usually pair off for life. As such, Paco’s mate is likely to be grieving. We’re not sure if Paco is a male or female but his clan is definitely distressed and have been observed to be highly irritable at the first signs of humans now.'

Sahadeo said Paco is responding well so far and eating regularly, and has seemingly adjusted well to his temporary home.

He said the vet is hoping to return Paco to the wild as soon as possible and even before the final release, Paco would be allowed visits to the family roosting area from as early as this weekend.

Sahadeo said they are all hopeful that his wing will heal and allow him to fly again.

‘Whether he actually flies depends on how well it heals.’