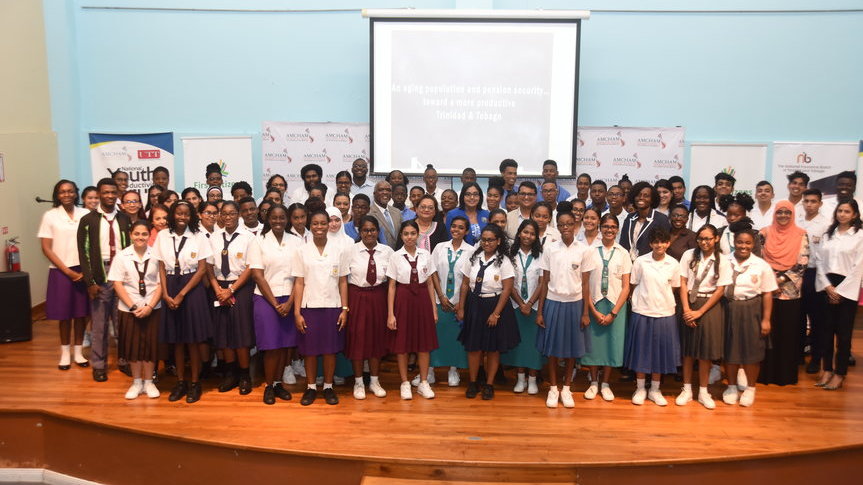 Discussions in the American Chamber of Commerce of T&T’s (AMCHAM T&T) 11th Annual National Youth Productivity Forum (NYPF) are due to take place in under a week.

The National Youth Productivity Forum (NYPF) – an AMCHAM T&T initiative – has trained over 1200 students in critical thinking, presentation skills and workplace protocol over the past decade.

The 11th Annual NYPF was launched at the Chaguanas Borough Corporation auditorium on January 22. This year’s theme is “An ageing population and pension security…toward a more productive Trinidad and Tobago”.

“The working age population (15-59 age group) will decline by almost 25 percent over the same period…This demographic trend will negatively impact the sustainability of the NIS, as expenditure on the retirement benefit, is projected to increase substantially, while the number of persons in the contributory base is set to decline.”

The AMCHAM T&T CEO also delivered critical thinking training to students in Trinidad and as well in Tobago in preparation for the discussion rounds which begin on February 11.

Students then viewed presentations on the effects of the ageing population and the current pension scheme. Participating secondary schools will be given the opportunity to discuss solutions to the issue from one of the following perspectives; government, business, labour or civil society.

This year, over 160 students between the ages of 16 to 18 participated from secondary schools throughout North, East, Central and South Trinidad and Tobago. Thirty-four On–The–Job Trainees (OJTs) from the Chaguanas Borough Corporation also joined the training sessions.

NYPF has also embraced social media with schools participating in online discussion forums. There is also a project component, where students as tasked with developing sustainable entrepreneurial projects. Past project winners Presentation College Chaguanas and Goodwood Secondary School Tobago have since taken products they developed in NYPF to market.

Winners of the NYPF will be announced at a closing ceremony in March 2020.