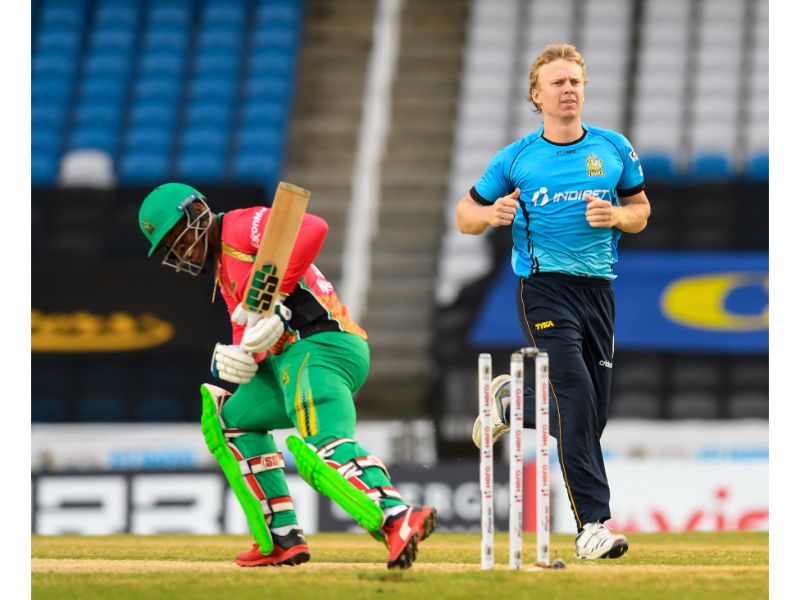 In one of the most remarkable semi-finals in CPL history, the Zouks bowled out the Amazon Warriors for 55 in 13.4 overs and then rolled to victory in only 27 balls.

After putting the Amazon Warriors to bat, Zouks opening bowler Scott Kuggeleijn has Brandon King caught behind and then bowled Shimron Hetmyer with a candidate for ball of the tournament to leave the five-time finalists reeling at 0-2.

After Mohammed Nabi (1/6) and Roston Chase (2/15) claimed further wickets, the Guyana Amazon Warriors looked on the road to recovery at 51-5.

However, in an astonishing implosion, they lost last five wickets for four runs to be bowled out for 55, the second lowest score in the history of the tournament.

Zahir Khan claimed 2/12 and and Mark Deyal 2-2 in a swift and lethal end to the Amazon Warriors innings.

The shell-shocked Amazon Warriors were then spared a lengthy time in the field as Rahkeem Cornwall (32 off 17 balls) and Deyal (19 off 10 balls) finished the game off with 93 balls to spare.

The Zouks, who were playing in only their second CPL semi-final match, will now face the Trinbago Knight Riders in the final on Tuesday at 10am.

Zouks captain Daren Sammy put the Amazon Warriors in, but even he could not have seen this coming.

Nicholas Pooran denied Scott Kuggeleijn a hat-trick, but only a single and a wide followed, and Mohammad Nabi followed up with a maiden to leave the Amazon Warriors 2/2 after two overs.

Pooran immediately counter-attacked, slashing Kuggeleijn over the slips then dismissively driving him down the ground for back-to-back fours, but he fell trying to loft Nabi down the ground thanks to a wonderful catch by Mark Deyal diving forward from long-off.

Chandrapaul Hemraj and Ross Taylor cautiously played out the rest of the Powerplay, at which point the Amazon Warriors were 21/3.

Taylor, so often the rock around which recoveries are built, fell LBW essaying his favoured sweep off Roston Chase, who anticipated the stroke well and bowled accordingly.

Deyal almost pulled off another amazing catch at long-off as Hemraj drove Zahir Khan aerially, but it just fell short, and a fifth straight over with only three runs off it passed, leaving the Amazon Warriors 27/4 off eight overs.

The extent to which the tension was pressing on the Amazon Warriors was obvious.

Hemraj got a friendly full toss from Chase but only pushed it for two, nearly holed out next ball, and then Keemo Paul did hole out with a swipe down the throat of Kesrick Williams at deep square leg.

Hemraj finally hit the innings’ first Hero Maximum off its 56th ball, slamming Zahir over deep midwicket, but at halfway the Amazon Warriors had crawled to 42/5.

Chase’s first over after the chase was quiet, but the next was anything but.

Amazon Warriors captain Chris Green smashed Javelle Glenn’s first ball for a Hero Maximum, and seemed to have done so off his second ball but Nabi pulled off a brilliant balancing catch at the boundary’s edge.

With spin so dominant, Sammy went to Deyal who answered the call emphatically with two wickets in two balls - Hemraj inside-edged onto his stumps via his pad, and Romario Shepherd first ball pushed a simple catch back to the bowler.

Again there was no hat-trick, but the Amazon Warriors innings was not long for this world.

Fletcher showed sharp glovework to stump Kevin Sinclair off Zahir, and even sharper moves in celebration, and the Amazon Warriors’ ignominious innings ended next ball as Rakheem Cornwall plunged forward to take a sharp slip catch off Imran Tahir.

All six Zouks bowlers had taken a wicket, and the innings had lasted just 13.4 overs.

Cornwall showed that a low target wasn’t going to temper his belligerent instincts, launching two Hero Maximums in Green’s first over, whipping Tahir for four through short fine leg and nearly breaking the stumps at the non-striker’s end with a straight drive.

Deyal hit fours off each of his first two deliveries, and the Zouks were almost halfway to their target after two overs.

Naveen-ul-Haq was visibly furious with how the evening had gone for his team, bowling a bouncer that sailed even over the towering Cornwall for five wides.

Cornwall continued his merry mayhem by walloping Naveen through long-on for four, and Deyal picked up a Hero Maximum for himself with a gleeful mow over midwicket.

Cornwall blasted Tahir over long-on for his third Hero Maximum, Deyal closed the fourth over with his third four, and captain Green went down with his ship by bringing himself on for the fifth with just three runs to win.

The Zouks dugout were loudly chanting for Cornwall to finish the game in style, and although a toe-end through third man wasn’t quite what they had in mind, by winning in just 4.3 overs they had completed the fastest chase in the history of T20 franchise cricket anywhere in the world, and the whole game was done in just 17.1 overs.

If the Zouks can take anything like this energy into Thursday’s final, they might just challenge the so far invulnerable Knight Riders.

Zouks fight back to beat Tallawahs by 11 runs